With their final 72 hours winding down, 3 Indonesian Christians received their Last Rights from a priest today before their planned executions.

The 3 will face a firing squad later today and want the executions to be public. 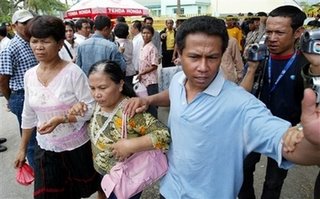 Indonesian officials ignored the plea of Pope Benedict XVI to call off the executions of the 3 Christian men on death row:

About 4,000 police and soldiers have been deployed in Palu, said provincial police spokesman Muhammad Kilat.

“We are increasing our vigilance to anticipate any untoward incidents,” he said, adding that so far there were no signs of a major protest rally against the executions.

The men’s execution was delayed in mid-August after a plea for clemency from Pope Benedict XVI and demonstrations by thousands of Indonesian Christians.

Pope Benedict had called on Indonesia to stop the imminent execution, as thousands of Indonesians held a prayer vigil in opposition to the death sentences. 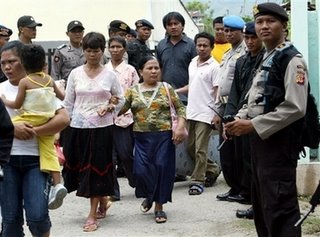 Nurminkasiala, center, wife of Fabianus Tibo, one of three Christians found guilty of leading deadly attacks on Muslims six years ago walks off after meeting her husband at Petobo Prison in Palu, central Sulawesi, Indonesia, Thursday, Sept. 21, 2006. Three Christian militants awaiting execution met with relatives and a priest for the last time Thursday at their prison, calling for investigations into sectarian violence to continue after their deaths. (AP Photo/Achmad Ibrahim)

World Net Daily wrote about the three men who claim they were falsely accused of violence after a Muslim clash:

The three men claim their convictions resulted from irregularities during their trial. They contend, for example, the judge in the case neglected to consider the testimony of 13 different witnesses – including the defendants themselves – that would have exonerated them.

A number of other witnesses – including Irwanto Hasan, who at the time was a member of the Poso Police Intelligence Division – say the men were part of a humanitarian team when they were arrested.

They came to Poso in 2000 after hearing reports a Catholic Church there had been burned, Jubilee Campaign said.

The men entered the conflict zone to evacuate children from a church-run school in the village of Moengko, Poso City. On the morning of May 23, 2000, a Muslim mob entered the village and set fire to the church. The defendants and the students escaped out the back door before the building burned to the ground.

A few days later, according to Hasan, Tibo and the others were recruited by the Red Group, described as a “militant Christian group.” Hasan claimed the men acted to subvert the Red Group’s leaders and protect various individuals – both Christian and Muslim – from violence.

The Former Indonesian president spoke out against the executions today.

Michelle Malkin wrote more on this sad story earlier in the week.