Indian officials believe that those behind the Malegaon blasts at a Friday Muslim prayer service that killed 31 people were radical Muslims connected to the Mumbai blasts. 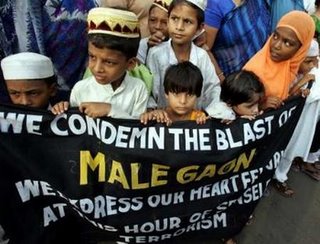 Children hold a banner in the eastern Indian city of Kolkata September 9, 2006, as they attend a prayer meeting for the victims of bomb blasts in Malegaon, a Muslim-majority town in Maharashtra. (REUTERS/Parth Sanyal)

Indian authorities now believe that the Islamic terrorists behind the Mumbai bombings are connected to the bomb blasts at a Muslim prayer gathering in Malegon on Friday:

Senior Mumbai and Nashik police officers say Khan and Hussein have been absconding since the latter half of May. They suspect Raheel had “instructed” them on the Malegaon blasts.

A senior police officer said Raheel, a top Lashkar-e-Tayyeba commander, had stayed in Malegaon for a few weeks before fleeing to Bangladesh in May.

Nashik’s inspector general of police PK Jain said they were “looking into Raheel’s involvement in the blasts. I have asked a team of officers to find out about Raheel’s movements in the city in recent months.”