President Bush spoke at a luncheon for Governor Bob Riley of Alabama on Thursday September 28, 2006. He did not hold anything back as he blasted the democrats and their record of “criticism and obstruction” in the War on Terror.

The terrorist Zawahiri, number two man in the al Qaeda team — al Qaeda network, he said, we’ll proceed with several incremental goals. The first stage is to expel the Americans from Iraq; the second stage is to establish an Islamic authority, then develop it and support it until it achieves the level of caliphate; the third stage, extend the jihad wave to secular countries neighboring Iraq; and the fourth stage, the clash with Israel.

This is the words of the enemy. The President of the United States and the Congress must listen carefully to what the enemy says in order to be able to protect you. It makes sense for us to take their words seriously if our most important job is the security of the United States. Mr. Zawahiri has laid out their plan. And that is why they must be defeated. (Applause.)

Some Democrats in Congress say that we should not be fighting the terrorists in Iraq. 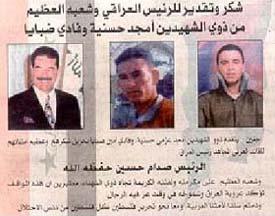 This January 2001 letter, in the Palestinian paper, Al Quds, says: “Gratitude and appreciation to the President of Iraq and his great people from the relatives of the martyrs Amjad Hassinah and Fadi Dhabayah.” (Hussein and Terror)

More from the President:

(Democrats say) It was a mistake to go into Iraq in the first place. I believe these Democrats need to answer a simple question: Do they really believe that we would be better off if Saddam Hussein were still in power? In a recent interview, the top Democrat on the Intelligence Committee was asked this very question. And his answer was, yes, yes, and, yes. 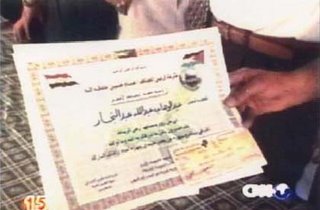 I strongly believe that Iraq is a central front in the war on terror. The Democrats may not think so, but Osama bin Laden does. Here are the words of bin Laden, “I now address… the whole… Islamic nation: Listen and understand… The most… serious issue today for the whole world is this Third World War… [that] is raging in [Iraq].” He calls it “a war of destiny between infidelity and Islam.” He says, “The whole world is watching this war,” and that it will end in “victory and glory or misery and humiliation.”

For al Qaeda, Iraq is not a distraction from their war on America, it is a central battlefield where there’s — outcome of the struggle will be decided…

Democrats in Washington have been quoting the NIE a lot in recent days, but you don’t hear them quoting that part of the document. The Democrats can’t have it both ways. Either they believe that Iraq is a distraction from the war on terror or they agree with the intelligence community and the terrorists themselves that the outcome of Iraq is important in the war on terror. Truth is, the Democrats are using the NIE to mislead the American people and justify their policy of withdrawal from Iraq…

The stakes in this war are high, and so are the stakes this November. Americans face the choice between two parties with two different attitudes on this war on terror. Five years after 9/11, the worst attack on American homeland in our history, the Democrats offer nothing but criticism and obstruction, and endless second-guessing.