No wonder the Former Clinton Administration and democrats did not want “The Path to 9-11” aired!

Someone reminds us all of Clinton’s most memorable moment… 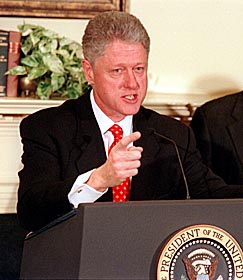 …And, the most memorable lines we just can’t forget:

But I want to say one thing to the American people.
I want you to listen to me. I’m going to say this again: I did not have sexual relations with that woman, Miss Lewinsky.
I never told anybody to lie, not a single time. Never.
These allegations are false. And I need to go back to work for the American people.

Not to mention his many gaffes in fighting terrorism.

Glenn Reynolds gives his take on “The Path to 9-11”

Despite the best attempts by the media, Clinton did not do much better with Saddam.
Hat Tip Larwyn