It seems like just yesterday that the Hungarian Prime Minister Ferenc Gyurcsany was cavorting to Pointer Sisters’ disco hits…
(This video is like nothing you have ever seen! …45 seconds)

Now, Ferenc is battling for his political survival after he “lied for a year and a half” about the nation’s economy to win re-election!

On Tuesday police and protesters clashed for the second time in Budapest after hundreds of the protesters tried to storm the Socialist Party headquarters.
The BBC reported:

Police on horseback charged a group of protesters who were attempting to reach the governing Socialist Party’s HQ.

Several people were injured in the clashes, which followed a 10,000-strong peaceful protest outside parliament.

The two days of protests were sparked by a leaked tape in which Mr Gyurcsany admitted lying to win re-election.

About 1,000 protesters broke away from Tuesday evening’s peaceful demonstration in front of the parliament building and tried to reach Republic Square, the BBC’s Nick Thorpe in Budapest reports.

One group appears to have reached the square, while riot police prevented others getting there.

Global Voices has this:
Henrik of Hungarian Accent explains why the protesters chose to storm the TV building:

…this is an iconic factor dating back to the revolutions of 1956. Ironically enough, even the state TV used this factor a few months ago in its marketing campaign: “If there would be a revolution which TV station would You want to take over?”. I’m sure this was not the answer they were hoping to get. 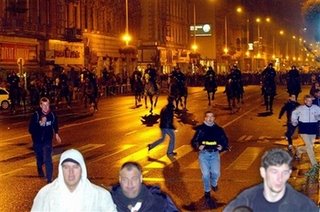 Hungarian demonstrators run away from mounted policemen in the Rakoczi Avenue in Budapest, Hungary, early Wednesday, Sept. 20, 2006, during the anti-government protest. Mounted police charged on protesters outside the Socialist party headquarters in renewed unrest provoked by a leaked report by prime minister Ferenc Gyurcsany admitting that his government had repeatedly lied to the public about the economy. (AP Photo)

Publius Pundit has the latest developments.

And, Pajamas Media is following the latest action.