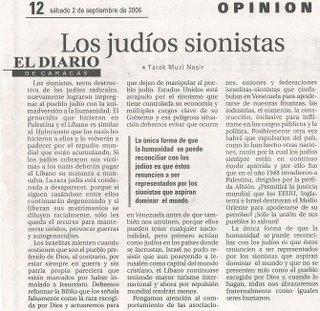 Daniel at Venezuela News and Views and Alexandra Beech translate:

Zionists, the destructive sect of radical Jews, are again impregnating the Jewish community with its animosity towards humanity. The genocide they executed in Palestine and Lebanon is similar to the Holocaust which the Nazis executed against them, and they will undergo another Holocaust because of the global hatred they are accumulating. If the Jews have charged the Nazis for their victims, they will have to pay Lebanon for their killings. The Jewish race is condemned to disappear, because if they continue marrying among themselves they will continue to degenerate; if they open their marriages they will racially dilute themselves, so they only recourse is to stay united, to provoke wars, and auto-genocides.

Israelis are lying when they say they are the favored people of God; on the contrary, because they are always at war and without their own land, it seems that they are marked for having destroyed Jesus Christ. We should reform the Bible which falsely refers to them as the chosen race by God, and we will act to stop them from manipulating the Jewish community. The United States is trapped by Zionists who control their economy and many critical positions in their government; and we must avoid that this critical situation takes place in Venezuela before they also ruin us, because they can possess any nationality, but first they act as Jews in whatever land they plant themselves.

Can it get any more disgusting than this?
Yes… It does.

Daniel has the rest of the article.

** And, now you can buy your “Chavez Sucks” T-shirts HERE.

American Thinker has more on the Democrats and the Anti-Semitism of Hugo Chavez.
Hat Tip Larwyn