Update: Nasrallah attacks US in his brief public speech…

Hezbollah has 20,000 rockets! Is Stronger than Ever!
(More Below)

It probably took a while to get to the rally since the bridges and roads are blown out, and the area may look a little barren from the buildings that were flattened a month ago, but Hezbollah went ahead with their Victory Celebration anyway today…

Even though their leader Nasrallah is afraid to come out of hiding for more than a few minutes.

Some victory…
When your organization loses a quarter of its fighters while causing Lebanon untold damage and more than 1,000 civilian deaths! 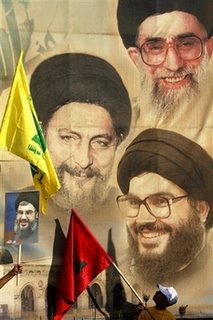 Nasrallah did make a brief appearance at the rally today, the first time he has been seen in public in over a month:

Hezbollah’s leader Sheik Hassan Nasrallah made his first public appearance since his group’s war with Israel began July 12, taking the stage Friday at a rally by thousands of his supporters in Beirut’s bombed-out suburbs.

Nasrallah had called the rally to celebrate the “divine and historic victory” over Israel, and supporters packed a lot for an expected speech by the guerrilla leader.

The crowd roared as Nasrallah appeared waving to the crowd, flanked by his bodyguards as an announcer said, “The leader has arrived.”

Hugo Chavez posters were displayed in the area. 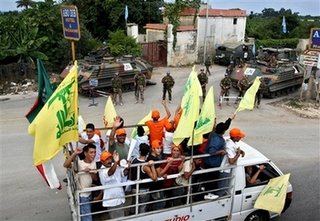 Hezbollah supporters, riding in the back of a pick-up truck and waving Hezbollah flags, drive past Italian U.N. peacekeepers manning a checkpoint in the southern village of Qassimiyeh, Lebanon, Friday, Sept. 22, 2006. (AP)

Here’s a buried piece of news from the BBC’s report on the rally:

All of the major politicians allied to Hezbollah are expected to attend.

The Prime Minister, Fouad Siniora, says that he has not been invited.

Since the cessation of hostilities Hezbollah has been organising reconstruction in its heartlands and paying compensation to the families whose homes were destroyed.

But it has also been calling for a government of national unity to replace the current one.

…Meaning Nasrallah is going to push for a “Hezbollah” Government! 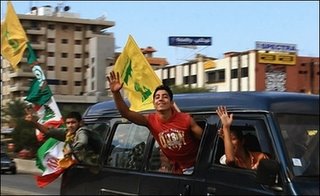 Lebanese youth wave from a bus, decorated with Hezbollah, Amal movement and Iranian flags, as they head to the southern suburbs of Beirut to attend a massive “victory” rally. Hezbollah supporters and fighters were filling the devastated southern suburbs of Beirut with a sea of yellow flags to celebrate “victory” in their month-long war against Israel.(AFP/Marwan Naamani)

Nasrallah attacked the US in his first public speech since July in a rally of half a million people:

“It is a great divine victory. Only with the help of God were we able to obtain this result,” said Nasrallah, referring to the 33-day conflict in which more than 1,000 Lebanese were killed and close to a million displaced.

“You, resistance fighters, managed to stand up to the (attacks from) the most powerful in the Middle East, on land, from the air, by sea. You, just a few thousand of you, managed to turn back the enemy fleet, the enemy tanks, you resisted against air raids for weeks. And yet you did it. This can only be explained by the intervention of God on our side in our struggle against the Zionist enemy,” said the Hezbollah leader.

He went on to say the victory was “both historic and strategic” as well as divine.

“It was an American war in all and for all. Washington decided it, directed it, armed Israel, defined the strategy. For four weeks they did not want to stop the war because it was their war. But they did not succeed in their intention, which was to crush Hezbollah. They had incorrect information and (intelligence) reports and they lost.”