Five years ago this night, Republican and Democrat Senators and Representatives gathered on the Capital steps and sang “God Bless America”… Together!
But, that was five years ago.

While Margaret Thatcher shows class and character, Harry Reid really can’t help himself today on the 5th Anniversary of 9-11. 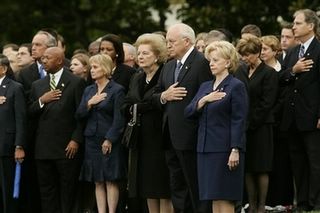 Five years after the Sept. 11, 2001 terror attacks on America, Vice President Dick Cheney, his wife Lynne Cheney, right, and former British Prime Minister Margaret Thatcher, third from left, pay their respects to the nearly 3,000 victims during a observance ceremony on the South Lawn of the White House in Washington, Monday, Sept. 11, 2006. President Bush is attending observances in New York and Pennsylvania. In an hour-long news interview yesterday, Cheney defended his role as a leading advocate for invading Iraq in the aftermath of the attacks, while Senate Democratic leader Harry Reid of Nevada responded that ‘Vice President Cheney’s influence over our nation’s foreign policy has made America less safe.’ (AP Photo/J. Scott Applewhite)

From the desk of Senate Minority Leader Harry Reid on the 5th year Anniversary of 9-11:

“Vice President Cheney’s influence over our nation’s foreign policy and defense has made America less safe. The Vice President was a chief architect of the effort to manipulate intelligence to build a case for invading Iraq, he ignored the threat of insurgencies, he took our eye off the ball in Afghanistan, and today he made clear that he would do nothing different. Vice President Cheney’s appearance today proves that he just doesn’t get it.”

It is really no surprise. The democrats have fought this Administration tooth and nail since 9-11 anyway. Why should today be any different?

AllahPundit notes that, “Our moral betters are using the occasion, naturally, as an opportunity to note Bush’s failures.”

And for the ACLU, it’s also just another day to attack Bush.