This is really too much!… I didn’t realize the people of Tennessee were so stupid. At least, Harold Ford Jr. thinks so! 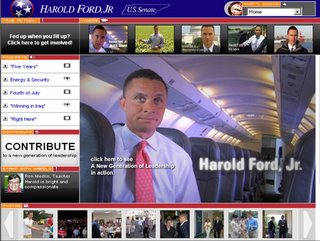 I could actually stomach Harold Ford Jr., until I found this out.

Democratic Senatorial Candidate from Tennessee, Harold Ford Jr., released his campaign ad on National Security. The ad is posted on his website and linked to above. This is what Ford Jr. has to say about National Security:

Harold Ford Jr: “Once again terrorists tried to take down planes. This time with liquid explosives. Thank God the British stopped them. I’m Harold Ford Jr. The bipartisan 9-11 Commission said the airport failed on security 5 years after September 11. And, today our ports and borders remain vulnerable to terrorists. It’s time to put a stop to politics. Adopt the commissions 41 recommendations and get tough with controlling our borders. I approve of this message because there is nothing, nothing more important than our security.”

Sounds great! It really does…
Unfortunately, Harold Ford Jr. has a history!

As Elizabeth Dole said after Harold Ford Jr. attacked her on national security this week:

“He’s a politician that will say one thing in Tennessee, and vote another way in Washington.”