This is a very promising and exciting development…. 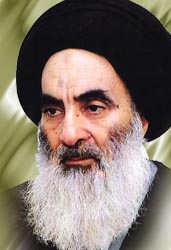 In fact Iraqi Muslim leaders, including grand ayatollah Ali al-Sistani, have expressed solidarity and understanding towards the Vatican. A representative of al-Sistani, who is Shia Islam’s highest authority in Iraq, has said that he wants to visit the Pope.

And, here is more from Assyrian International News Agency:

Religious leaders, among them al Sistani, have shown solidarity and understanding towards the Vatican. Moreover, the representative of the highest religious exponent of Iraqi Shiites has expressed the desire to be able to visit the Pope…

…The lecture of Benedict XVI in Regensburg was misunderstood by the media as being an attack on Islam. Although the pope explained the true meaning of his words several times over, bitter and threatening criticisms continue to come from many sectors of Islam. In Iraq, it is fundamentalist and political Muslim splinter groups that are reacting violently to the pope’s address. Recently, the Secretary of the Nunciature in Baghdad, Mgr Thomas Halim Abib, met religious representatives of Islam and offered them an Arabic translation of the words of the pope, so Muslim leaders would be able to understand the true meaning of what was said. Muslim religious leaders undertake the task of informing their communities.

Mgr Thomas told AsiaNews that in these days, the official representative of the Grand Ayatollah al Sistani, the undisputed leader of Shiite Islam in Iraq, visited the Vatican Nunciature twice to express friendship and solidarity.

The representative of al Sistani accepted the explanations rendered by the Nunciature and spread them among all Iraqi Shiite communities, expressing respect for the Holy See “that has always been close to the Iraqi people”. The representative of the grand ayatollah also said he wished to go to Rome to visit Pope Benedict XVI.

On Friday a representative of al-Sistani called for a dialogue among religions.

Iraq’s envoy to the Vatican met with the Pope this week with other Muslim leaders. Albert Edward Ismail Yelda said Benedict’s address to the envoys should bring an end to the anger over the pontiff’s remarks.

Grand Ayatollah Ali al-Sistani, led the country through a very difficult political stalemate earlier this year. Al-Sistani also urged followers to vote in the elections in 2005 despite the violence. His secular style of Shia Islam is in contrast to the more radical Islam witnessed in Iran.

Update: The Pope today came out and said that true tolerance must be based on respect and that he respects Islam.