Update: Another shot from the GM fan site… 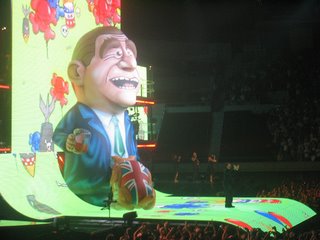 Another Bush balloon shot from George Michael’s concert tour.
This must be really cool for 9th graders, but not so much for a 43 year old man.
What’s with the cigar? 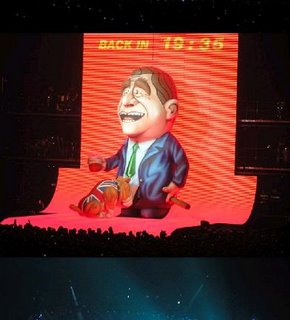 George Michael opened his first solo concert series in 15 years this weekend with a crude balloon attack on George Bush and Tony Blair:

The only envelope-pushing moment came at the end of the first set, when Michael sang his 2002 controversial anti-Bush song, “Shoot the Dog.”

During the song, an enormous balloon depicting a cartoonish President Bush rose out of center stage, drawing whoops and yells from the crowd. But the real surprise came when Michael leaned down to unzip the balloon’s trousers, and out popped a British bulldog draped with the U.K. flag. The dog was stuck to the balloon’s inflated crotch, wagging its tail. 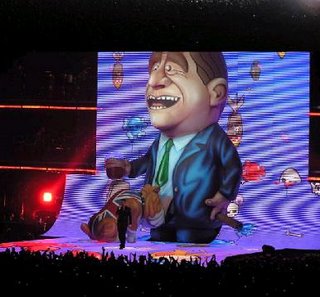 The singer began with a passionate rendition of his 2002 political track, Shoot The Dog, and as he sang the anti-war number, which portrayed Tony Blair as George Bush’s poodle, a cartoon backdrop showing Bush, Blair and the Prime Minister’s wife, Cherie, in bed together, emerged.

While the song itself has gained in resonance over the years, George used it to unveil the Barcelona show’s most shocking visual image. An enormous balloon, a grotesque cartoon version of the American President, rose out of the centre of the stage, hovering menacingly above the singer.

When the star leaned down to unzip the balloon’s trousers, out popped a British bulldog draped with the UK flag. The dog was stuck to the balloon’s inflated crotch, wagging its tail, reports the Daily Mail.

Here are a few lines from “Walk the Dog”

Nine nine nine gettin’ jiggy
People did you see that fire in the City?
It’s like we’re fresh out of democratic,
Gotta get yourself a little something semi-automatic yeahh

That’s why I’m always gettin’ stoned yeah
That’s why I’m out there havin’ fun again
Good puppy, good puppy
Rolling on over for The Man…