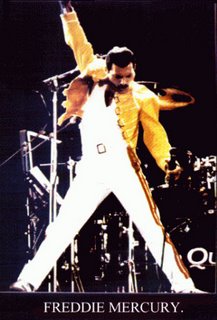 For some reason, I’m thinking Freddie Mercury’s decision to move from Muslim Zanzibar was a good one… and not just career-wise.

Via Stefania…
Muslims threatened to disrupt an AIDS benefit in honor of former Queen lead singer Freddie Mercury so it had to be cancelled:

Organizers of a 60th gala birthday party for the late Zanzibar-born rock star Freddie Mercury, have cancelled the weekend event after outraged Muslims threatened to disrupt it.

Faced with fierce opposition from Islamists, who complained the flamboyant Queen lead singer’s lifestyle was offensive to many on the overwhelmingly Muslim archipelago, organizers said they had no choice but to call it off.

“We have decided to cancel the party after misleading and erroneous information was spread about it,” said organizer Simai Mohamed Saidi, who runs a Freddie Mercury theme restaurant in the capital.

“I urge Muslim groups in the future to seek correct information from us instead of relying on rumors,” he said in an open letter, adding the event was intended to be celebration to honor Mercury, who died of AIDS in 1991.

Saidi also lamented that the cancellation would hurt his intention to use the party to raise money for HIV/AIDS victims on Zanzibar.

Conservative Zanzibari Islamists last week demanded that authorities ban the party and then vowed to stage mass demonstrations if it went ahead, saying it would tarnish the islands’ reputation and culture and promote homosexuality.

“We were ready to join forces against the party because we had information that a number of gays from abroad had come to take part,” said Sheikh Azzan Hamdani of the association for Islamic Mobilization and Propagation (UAMSHO).

“We had also written letters to the tourist commission and the owner of the Mercury restaurant, demanding that they stop the party,” he told AFP.

I guess they aren’t Queen fans back home?