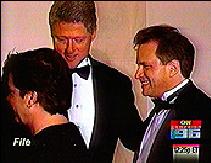 Mr. Morris is best known as a central strategist in Bill Clinton’s re-election campaign for President of the United States.

Last week, Mr. Morris and Eileen McGann published a critical article about the Clinton’s that the Main Stream Media largely ignored. Entitled “Emir’s A Gusher for Bill and Hillary” the op-ed charges that Bill Clinton and those in the inner circle of both Clintons have enjoyed large financial benefits from Clinton’s relationship with Sheik Mohammed Bin Rashid Al Maktoum. This story involves the controversial Dubai ports deal.

Since publication of this largely ignored column the news media has been hotly debating President Clinton’s handling of the hunt for Osama bin Laden. Did he do enough or didn’t he? Did Senator Clinton know that her campaign consultants were on the payroll of the Sheik?

In its continuing effort to bring to the blogosphere information that the Main Stream Media downplays or ignores One Jerusalem took the opportunity to have one of the most astute Clinton watchers give his perspective.

Dick Morris came out of the corner swinging…

Bill and Hillary Clinton’s connection between the emir of Dubai, Sheik Mohammed Bin Rashid Al Maktoum, seems ever more intimate. There is no six degrees of separation here! And, just how is Clinton being compensated for helping the Sheik?

* We don’t know.
* There is a substantial basis for believing that it is a very large sum.
* The flip side is that there is a political side to this involving Sheik Mohammed Bin Rashid Al Maktoum.
* The emir is not a great guy. He is cited in a Miami court case for camel jockeying- child camel riders, a very dangerous profession especially for children.
The political reputations of the Clintons are linked to this story.

This was touched on briefly in the spring.
Previously:
Bill Clinton’s Ship Comes In as Hillary Closes Port

Clinton’s UAE Dealings No One Night Stand, Hillary in Denial

More on the Clintons and the November Election:

* Clinton was a dismal failure in fighting terrorism.

Dick Morris told Bill Clinton that his legacy would include how he dealt with the terrorism. He failed!

Hillary is a European liberal and believes that they have a system that we need.
Was Clinton deliberate in his interview? 9-11 Report (and the conservative blogs) contradicts everything that the Clinton’s said during his FOX interview.

There is nothing Bill does that is out of control. His rages are the ultimate form of control. The closer you get to the truth the more vociferous he is with his indignation. Once the issue was raised about how he fought terrorism, he thought he had to unload. September is always his month. Not this year. Bill stepped on his story and brought attention to the Clinton years. This was a mistake. Ask Bill about something that hits close to home and he rages.

Sandy Berger was trying to take documents with hand written notes that would implicate the Clintons. This essentially knocked him out of the race for the Secretary of State. He was covering for the Clintons and actually destroyed some of the documents that he stole.

Dick writes columns for The Hill and the New York Post.

Clinton threatened the media last week in an interview on Thursday morning about getting too close.

Gore would be the only one to beat Hillary next year in the primaries. He won’t.

When Hillary wins the democratic primary she has a very good chance of winning the national election.
The under-represented single women will come out in droves to vote for her.

Kerry had 9 million new voters.
With Hillary in the race, there will be a huge increase in voter turnout. Blacks and Hispanics adore the Clintons.

Q: Why did Sandy Berger only got a wrist slap?
Morris: Bush helped the Clintons.
Bush pardoned the Clintons and their people.
Bush linked Bill Clinton to his father, Bush Sr., in Katrina and the tsunami relief and this elevated Bill tremendously.
Laura Bush just last week spoke at the Clinton Summit.
The Bushes did more to elevate the Clintons than anyone.

Midterms?
The country wants to vote democrat. The country feels protected. The issues that remain lean toward the democrats. The scandals are horrific and the attempts to reform miniscule. Most people do approve of Patriot Act and wiretapping.
Bush every single day has to push the terror issue. It is very hard to make prediction at this point. Today 3-4 Republican and some house seats would be lost but this will change and slant towards the democrats in the month of October.

Next week One Jerusalem will have an expert on the Middle East and International Terrorism talk about the Bangladeshi journalist who is on trial for blasphemy and faces the death sentence.

Among the bloggers on the call: Banagor from Broadsword, Don from Liberally Conservative, Jerry Gordon from Israpundit, Pamela from Atlas Shrugs, Anne Lieberman from Boker Tov Boulder, Michael Illions and Hank Butehorn from Conservatives with Attitude, Omri from Mere Rhetoric, Jim Hoft from Gateway Pundit, Kim Priestap from Wizbang, and Chad from GDLL.

One Jerusalem has audio posted from the call.