Democrats Try to "Edit Out" Clinton Protester at McCaskill Rally

Local democrats did not like the Clinton-bashing protester at the McCaskill Rally in St. Louis on Saturday.

So they tried to “edit” her out of sight! 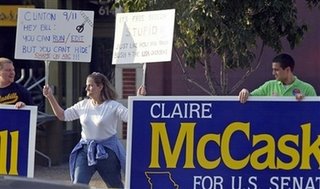 Martha Walker, center, of St. Louis, races to get in front of unidentified supporters of Missouri U.S. Senate candidate Democrat Claire McCaskill on the sidewalk before a rally, Saturday, Sept. 9, 2006, at The Pageant theater in St. Louis. Walker was holding protest signs across the street from the rally but was being challenged by the McCaskill supporters as they tried to cover her up with their bigger signs. Former U.S. President Bill Clinton was on hand for the rally to support McCaskill’s campaign for U.S. Senate. (AP Photo/Kyle Ericson)

Just more of the same from the free speech crowd.

And, the story Claire McCaskill was hoping would just go away, about her outrageous comments against President Bush, was published in another Missouri paper and another one this weekend.

McCaskill has still not apologized for her pathetic attack.