Update: Bush calls democrats naive, will declassify intelligence documents now that they have been leaked by democratic operatives in the intelligence community.

Is this really a surprise?

The cherry-picked democratic talking points leaked to the press this weekend were from a 6 month old document!

The documents leaked to the New York Times and Washington Post were 6 months old!

And, in the other organized democratic attack on the Bush Administration, yesterday, democrats dragged the same-old Rummy-hating generals out for another attack on the Defense Secretary in a much publicized hearing… 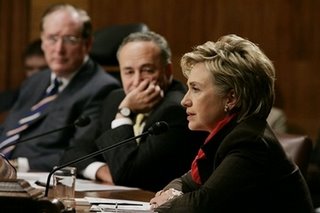 ** Isn’t it a shame that democrats don’t muster the same amount of energy they use attacking Bush into a security plan for their party and the country?

John at Powerline explains this latest attempt to damage President Bush and America:

In my addendum to this post by Paul, I repeated a point I’ve made several times before: one of the sinister aspects of leaks of classified information is that they are by nature selective. The leaker has access to lots of material, but he doesn’t leak it all: he only leaks what he thinks will best serve his political agenda. The recent leaks of alleged conclusions from the National Intelligence Estimate that was completed last spring is a perfect case in point. Paul and I talked about an article in the Washington Post by a reporter who obviously had not read the report. All she could do was pass on the Democrat leaker’s spin. Which, in all likelihood, she was happy to do.

In From the Cold, a website run by a former intelligence official, has much more:

Thankfully, the actual NIE is not the harbinger of disaster that the Times and WaPo would have us believe. According to members of the intel community who have seen the document, the NIE is actually fair and balanced (to coin a phrase), noting both successes and failures in the War on Terror–and identifying potential points of failure for the jihadists. The quotes printed below–taken directly from the document and provided to this blogger–provide “the other side” of the estimate, and its more balanced assessment of where we stand in the War on Terror.
In one of its early paragraphs, the estimate notes progress in the struggle against terrorism, stating the U.S.-led efforts have “seriously damaged Al Qaida leadership and disrupted its operations.” Didn’t see that in the NYT article.

Or how about this statement, which–in part–reflects the impact of increased pressure on the terrorists: “A large body of reporting indicates that people identifying themselves as jihadists is increasing…however, they are largely decentralized, lack a coherent strategy and are becoming more diffuse.” Hmm…doesn’t sound much like Al Qaida’s pre-9-11 game plan.

The report also notes the importance of the War in Iraq as a make or break point for the terrorists: “Should jihadists leaving Iraq perceive themselves to have failed, we judge that fewer will carry on the fight.” It’s called a ripple effect.

More support for the defeating the enemy on his home turf: “Threats to the U.S. are intrinsically linked to U.S. success or failure in Iraq.” President Bush and senior administration officials have made this argument many times–and it’s been consistently dismissed by the “experts” at the WaPo and Times.

Both Powerline and In From the Cold have much more on this latest democratic attack on our country’s future and well being.

Iraqi President Talabani said yesterday that he wants US troop presence until at least the end of 2008 and would like a longterm presence of US troops in Iraq to prevent foreign interference.

If the US withdrew troops today as the democratic leakers in our intelligence community suggest with their dated and cherry-picked betrayals, Iraq would be left less secure and open to failure. The Iraqis then might see a real and not just imagined Civil War and our democratic Mideast ally would be lost to terrorist groups and anarchy.

But, this doesn’t matter to the democratic leakers in our intelligence community!

Mona Charon at The Corner has more.