Updates from Denmark: Chemicals found… “Muslims” are angered at the arrests… All 9 attended the same mosque… Family says, “They couldn’t be terrorists!”…
Same-old-same-old

“A Danish convert to Islam arrested in a terror sweep sent an e-mail to a major newspaper complaining about Danes’ views on Muslims less than two hours before police stormed into his apartment,” the AP reported.

All 9 suspects arrested in Odense, Denmark attended the same mosque. 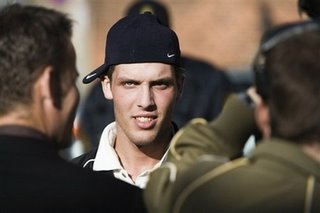 Mahir Amar, 18, speaks outside the courthouse in Odense Denmark Tuesday Sept. 5, 2006. Amar was among those later released Tuesday after a pre-dawn sweep that authorities said may have thwarted a serious attack in the Scandinavian country. A Danish court arraigned seven men on preliminary terror charges Tuesday. Anti-terror squads arrested nine men at 2 a.m. (0000GMT) in Vollsmose, a mostly immigrant suburb of Odense, Denmark’s third largest city. Two of them including Amar were later released. The suspects were not identified, but officials described those arrested as Danish citizens, aged 18-33. Eight had immigrant backgrounds. Arrar said he was with a friend at Odense’s harbor when police took them both to a police station. Arrar said he was released but his friend, whom he declined to identify, remained in custody. ‘I believe this is a big misunderstanding,’ Arrar said outside the courthouse. (AP Photo/Tariq Mikkel Khan)

The New York Times says the arrests have generated anger in the Danish Muslim community!

Yet again, the Western media apologizes for the arrests of the would-be mass murderers:

When the Danish police arrested his 24-year- old brother in a sweep aimed at averting an alleged terrorist plot, Saleh Hassan said he stared out the window of his apartment for the next 14 hours and prayed to Allah that he would not be next.

“If praying five times a day and being a Muslim makes you a terrorist, then we are all terrorists,” said Hassan, pointing to his tenement building in a poor immigrant neighborhood blanketed with satellite dishes that he said were tuned to Al Jazeera television.

Storing chemicals and planning bomb attacks makes you a terrorist, too!

Danish investigators said that a sting operation carried out Tuesday had uncovered chemicals used to make bombs, with unspecified locations in Denmark the likely targets.

The police said two of the nine men were held Wednesday under suspicion of plotting to carry out a bomb attack on Danish soil, while five others would remain in custody for up 72 hours, after which they would be charged or released. Two others were released Tuesday.

Danish citizens from immigrant backgrounds, aged 18 to 33. One was a convert to Islam.

Friends and relatives of those arrested said the suspects were Muslims of Palestinian, Iraqi and Kurdish origin, and all were active at the same mosque.

According to their friends, one was nicknamed “the ayatollah,” favored a djellaba, the loose-fitting garment popular in some Muslim countries, and gave sermons at the local mosque.

Investigators said the Danish detainees had similar profiles to suspects arrested in connection with the plots in London and Germany and reflected the emergence of a new generation of young, homegrown Muslim radicals willing to use violence against the countries of their birth.

“We call them the Al Qaeda generation,” said a European counterterrorism official familiar with the Danish investigation, who requested anonymity because it is ongoing. “They are not trained in Afghanistan or Iraq, but are young frustrated Muslims, many of them from hard-working immigrant families, who access Al Qaeda on the Internet where they can find an outlet for their anger and alienation.”

Friends and relatives of the suspects said several were members of Dawa, a local devout Muslim group that targets errant Muslims who have turned to drugs or alcohol and tries to bring them back into the fold.

Jim Hoft
Jim Hoft is the founder of The Gateway Pundit, one of the top conservative news outlets in America. Jim was awarded the Reed Irvine Accuracy in Media Award in 2013 and is the proud recipient of the Breitbart Award for Excellence in Online Journalism from the Americans for Prosperity Foundation in May 2016.
EXCLUSIVE: The Lancet Study on Hydroxychloroquine Was a COMPLETE FRAUD - The Authors are Linked to the Pharmaceutical Industry and People Died Because of Their Lies!
New York Looters and Hoodlums Attack Guardian Angels Founder Curtis Sliwa - Break His Jaw with a Hammer During Riots
BREAKING: St. Louis Police Release Images of 7 Looters who Murdered Retired Police Captain David Dorn
Stuart Varney Goes Off After Corrupt Media Peppers President Trump with Outrageous Questions During Presser on Record Economic Numbers (VIDEO)
We Must Dedicate Ourselves to "Freedom's Victory over the Socialist Monster" - General Flynn Releases Important Message, Signals He Is Ready to Get Back into the Fight
See more...