When crazy makes the news…
CNN says: “Blogs are buzzing about a gas price conspiracy!”
Well, deranged nutroots on the Left, anyway!

Here is the CNN video.

Doug Henwood put this chart together on Bush’s approval rating and gas prices: 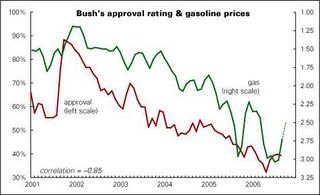 From the Left Business Observer

…This can only mean that Bush is controlling gas prices to bump up his approval rating!

And, here is some of the netroots/nutroots crazy talk that makes news on CNN:

A lower oil price is great, but can there be any doubt that Saudi Arabia, Kuwait, the UAE, and other Bush family colonies are selling reserves and pumping like mad to make it so? I predict it will work, by the way. The Republicans will retain control of Congress.

Renodiscontent.com had this on gas prices:

How about those gas prices? Those Republicans need all the help they can get and big oil is doing all it can to assist.

I would conclude that falling gas prices is just another example of manipulation of the public by the Bush and company.

Or, maybe that ‘blood for oil’ or ‘oil for blood’ program is finally kicking in…

Kokonut Pundits has more on the liberal gates of hell.

Engram at Back Talk absolutely shreds this latest moonbat theory with lots of charts and graphs to back him up.