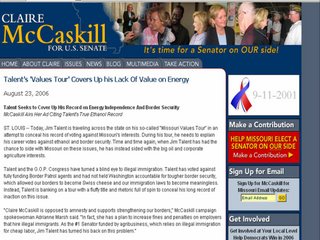 Please note that McCaskill is wanting to score points on Talent’s dubious(?) values with her press release.

Here is a section of Claire’s fact sheet from this news release attacking the “Values” of Jim Talent:

Here is a picture of her FACT SHEET from the McCaskill website: 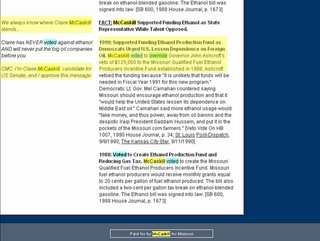 Claire McCaskill did not vote “to override Governor John Ashcroft’s veto of $125,000 to the Missouri Qualified Fuel Ethanol Producers Incentive Fund established in 1988.”

Claire McCaskill did not vote on anything in 1990!

Claire McCaskill was not a member of the Missouri legislature in 1990!

The Kansas City Star carried this news on September 6, 2006:

Democratic Senate candidate Claire McCaskill claims that as a member of the state Legislature, she voted to override a 1990 budget veto of an ethanol incentive fund.

But McCaskill never actually cast that vote. She wasn’t even a legislator in 1990.

McCaskill’s campaign acknowledged Wednesday that it “made a minor clerical error” when compiling a fact sheet to back up its recent radio ads highlighting energy issues.

McCaskill’s radio ad takes that same approach and concludes with an announcer proclaiming: “Claire has never voted against ethanol and will never put the big oil companies before you.”

A fact sheet supporting the ad declares that in September 1990, “McCaskill voted to override Gov. John Ashcroft’s veto of $125,000” for an ethanol producers incentive fund.

But McCaskill left the state Legislature in January 1989 and was working in 1990 as an attorney in private practice.

How messed up is that?