…But since his loss he has ramped up the rhetoric. Today his Leftist followers blocked Vicente Fox from speaking to the Mexican Congress.

The situation in Mexico is looking very unstable and increasingly dangerous! 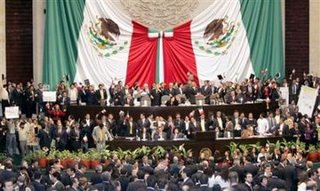 Opposition lawmakers storm the stage of Congress to protest Mexico’s disputed July 2 elections moments before the scheduled arrival of Mexican President Vicente Fox in Mexico City, on Friday Sept. 1, 2006. President Fox turned in a written copy of his annual state-of-the nation report Friday, but refused to address a Congress occupied by leftist lawmakers who demanded he withdraw heavy security surrounding the building. It was the first time in history a Mexican president hasn’t given the annual address. (AP Photo/Dario Lopez-Mills)

Obrador has close ties with Hugo Chavez from Venezuela. 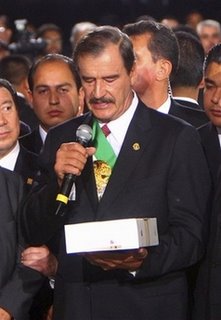 Mexican President Vicente Fox speaks as he prepares to deliver a copy of his State-of-the Nation address after he was unable to enter the main Congress hall amidst protests by opposition Congressmen in Mexico City, Mexico Friday Sept. 1, 2006.(AP Photo/Juan Arturo Monroy Hildegarde) 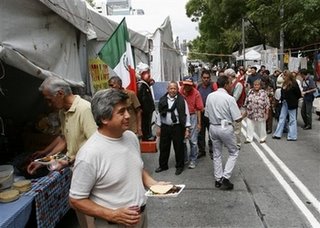 Supporters of Mexican presidential candidate Andres Manuel Lopez Obrador, get their lunch at one of the protest camps set up in Mexico City’s main Reforma avenue on Tuesday, Aug. 29, 2006. Lopez Obrador, convinced he won’t be awarded the presidency, has vowed to create a parallel leftist government and is urging Mexicans not to recognize the apparent victory of the ruling party’s Felipe Calderon with the support of thousands who are already occupying protest camps throughout downtown Mexico City. (AP Photo/Marco Ugarte)

Publius Pundit has been following the election and aftermath closely.
Mark in Mexico is also on this story.