The BBC has video HERE of the chaos after the blasts from local Indian TV.

Over 30 are dead as bomb blasts hit a Muslim prayer gathering in India! 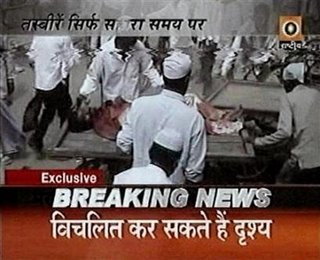 A video grab shows an injured man being taken away from the scene of a bomb blast in Malegaon, 260 km (160 miles) northeast of Mumbai, September 8, 2006. (Sahara TV/Reuters)

No one has taken credit for the blasts. The BBC has this initial report:

At least 37 people have been killed in bombings at a Muslim graveyard in western India, authorities say.

More than 125 others were hurt in the explosions after Friday prayers in Malegaon. The hospital in the town says 20 of them are in a serious condition.

State police chief PS Pasricha said a curfew had been imposed and police reinforcements sent to the town.

It is not clear what caused the blasts as Muslims left prayers. Prime Minister Manmohan Singh has led calls for calm.

No group has said it carried out the blasts in Malegaon, which is in Nashik district about 260km (160 miles) north-east of Maharashtra’s state capital, Mumbai. 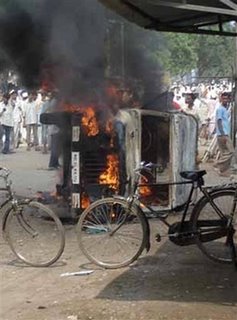 Rioters started pelting the police with rocks after the blasts. VOA reports:

A curfew was imposed as tensions rose after the explosions and angry crowds shouted slogans and pelted policemen with stones.

Maharashtra’s top police official, P.S. Pasricha says security has been tightened to prevent further violence. Pasricha says additional forces have been rushed to the area and the entire state of Maharashtra has been put on high alert. He says the police want to ensure that “anti-national forces” do not try to create trouble in the community.

Malegaon town has a long history of religious violence between the majority Hindu and the minority Muslim community. It lies about 300 kilometers northeast of India’s financial hub, Mumbai.

India Uncut has more on the attacks.