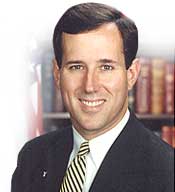 Senator Rick Santorum was on the forefront of those who opposed the US visit by Former Iranian President Khatami.

Senator Santorum brings moral clarity and certainty to whatever issues he addresses. Throughout his career, neither Party loyalty nor other political considerations have swayed him from advocating the right course of action.

Most recently, he opposed the Bush Administration’s decision to grant a visa to Ayatollah Khatami. He also publicly criticized Secretary Rice for adopting the European strategy of engaging the current regime in Iran. Senator Santorum is a leading proponent of supporting democratic forces in Iran and he has authored legislation to this effect.

Given his busy schedule, we were thankful that Senator Santorum shared with us his strategy for dealing with Iran and Islamo-Fascism.

Senator Santorum talked briefly about the Terror War and the reality of an enemy who does not value life.

Santorum believes that the UN is not going to be helpful in containing the Iranian nuclear threat.

He had no news on the John Bolton nomination that is stalled in Congress.

The Senator says the US needs to continue to support prodemocracy voices into Iran adn that there are many.

Senator Santorum also answered questions on the current situation in Iraq. he insisted that the US needs to support the Iran Freedom and Support Act, now.

Powerline wrote this on Senator Santorum earlier in the month when the senator was on a different blogger conference call:

Santorum is proposing a three-pronged approach to Iran: a push for free and fair elections; support for pro-democracy groups; and increasingly tough sanctions. He rejects the view of Fareed Zakaria, who urges folks to stop worrying and get used to the concept of a nuclear Iran, inasmuch as Iran is no Nazi Germany. Santorum contends that Iran need not be Nazi Germany for its development of nuclear weapons to be unacceptable. While Iran presumably will not invade its neighbors en masse, Hitler style, we nonetheless should be extremely concerned about what Iranian nukes would mean in terms of the regional balance of power, its ability to attack Israel, and its ability to supply its terrorist clients with WMD.

Once again, One Jerusalem is pushing for a massive turnout next week at the UN in New York City when the criminal and threatening Iranian President Mahmoud Ahmadinejad comes to speak to the General Assembly.

One Jerusalem will have a full audio from the conference call posted later in the day.

Pamela at Atlas Shrugs has a terrific roundup of information from the call and on the good work of Senator Santorum.

Please keep in mind the BIG RALLY at the UN Building in New York in protest of Iranian President Mahmoud Ahmadinejad next Wednesday!

Here is more on the historic rally on Wednesday, September 20th:

67 organizations have signed on to attend the protest!

The JCRC of New York has information on bus rides to the rally.