Senator Jim DeMint (R-SC) took a few minutes out of his very busy schedule to spend some time with a few conservative bloggers today. 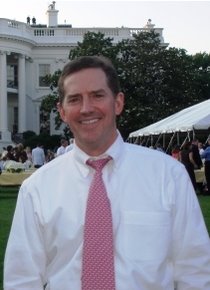 Senator Jim DeMint earlier in the day helped push the Warning, Alerts and Response Network (WARN) Act by a vote of 95-0.

The bill, sponsored by U.S. Senator Jim DeMint (R-S.C.) was added as an amendment to HR 4594, the SAFE Port Security Act. The WARN Act will create a national alert system by providing Americans with emergency information sent directly to their cell phones and other wireless devices.

The WARN Act takes the Emergency Broadcasting System and integrates it with the 21st Century technology. If there would be an emergency, then information could immediately go to a person’s cell phone, blackberry, etc.

Also today… Senator DeMint wanted to discuss the port security legislation that is currently being kicked around in the Senate.

The Statement of Administration Policy on the Port Security Improvement Act of 2006.

The Administration also supports the substitutes approach to the Integrated Scanning System Pilot (ICIS) that has been touted by some as a method to achieve 100 percent scanning of inbound cargo because a pilot program in Hong Kong has had some good preliminary results (see RPC paper on port security at www.rpc.seante.gov). However, the Hong Kong pilot is limited to scanning one lane of traffic entering the port (up to 50 lanes may be needed to retain the same commercial flow). The substitute expands the pilot program to other foreign ports, rather than mandate its use at all ports.

The Administration supports the authorization of various port security programs already in existence, and the creation of interagency operations centers to inspection cargo at 3,000 port facilities in the U.S. It also supports risk-based allocation of resources for facility inspections.

The Administration is concerned with the provision requiring DHS to consult with international organizations with regard to container security requirements, and with the absence of an authorization for DHS’s Domestic Nuclear Detection Office.

Austin Bay is going to post the audio from the short conference call up at Pajamas Media.
Thanks to Ed Driscoll for his help.