One Jerusalem had another terrific blogger conference call today with Malcom Hoenlein who was one of the first public leaders to issue warnings about the dangers of Islamic fundamentalism.. 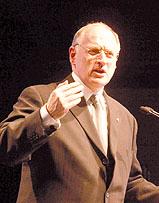 Mr. Malcolm Hoenlein is at the center of all major issues regarding Israel and the Jewish people. He is currently leading a campaign to organize a massive protest against the anti-American, anti-Israeli regime of Iran.

Mr. Hoenlein gave out details of the September 20th rally in New York City. He also shared his insights into the current situation in the Middle East. Among his many professional experiences, Mr. Hoenlein played a lead role in dealing with the government of Iran in trying to free Jewish hostages that had been taken by the authorities.

Mr Hoenlein started his talk today promoting the September 20th protest at the United Nations. This rally is planned during the Opening sessions of the General Assembly in New York. The plan is to have a massive gathering there to show Israel that the American people support her. Iranian leader, Mahmoud Ahmadinejad, is planning on addressing the General Assembly that day.

As far as the 34 day war…
Iran lost its strategic asset in Hezbollah and it is wrong to create a false impression by elevating Hezbollah (which is done by the media).

The UN is wrong to allow Mahmoud Ahmadinejad to address the General Assembly. He is a man who has threatened to wipe Israel off the map! He is insulting to the Europeans in their negotiations. There is nothing constructive coming from the meetings except the construction of nuclear plants. The UN has no intention of addressing the nuclear threat of Iran.

We certainly hope that the president does not allow Ahmadinejad to make any other stops while he is in the US.

Here is more on the historic rally on September 20th:

67 organizations have signed on to attend the protest!

The JCRC of New York has information on bus rides to the rally.

One Jerusalem will have the audio of Mr. Hoenlein’s talk up later today.

Related… The Columbian Journalism Review has a new issue about Iran by Bill Berkley.

“My encounter with Ali was typical of Iran: surprising, paradoxical, counterintuitive, and both gratifying and humbling for an American reporter whose memory of cold-war intrigue was short and whose assumptions about the so-called Islamic Republic turned out to be inadequate.”

This is an interesting look inside Iran.