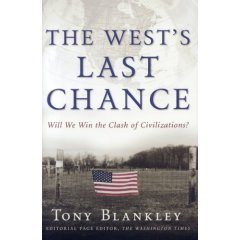 In The West’s Last Chance, Blankley who is still a confidant of Gingrich, brings his considerable experience and analytical skills to the problem of militant Islam. Mr. Blankley raises serious questions about the West’s ability to fight this war given the weakening commitment to Western values in the United States and the West. Mr. Blankley discussed the book in light of the ongoing controversy over recent comments by Pope Benedict XVI.

The writers of One Jerusalem believe The West’s Last Chance is a must read for policymakers and the general public. Mr. Blankley provided valuable insights into the current political situation in Washington, the nation, and Europe. He is one of the most astute observers of America’s political scene and he is also an expert on the situation in Europe.

One Jerusalem has the audio posted.
It was an excellent call- approximately 40 minutes.

The bloggers on the call included: Anne at Boker Tov Boulder, Omri at Mere Rhetoric (has an especially excellent summary), Jerry Gordon at Israpundit, Gateway Pundit, Lynn at In Context, Chad at Grandaddy Long Legs, Rick Richman at Jewish Current Issues, and Thomas Lifson at The American Thinker.