As Allman and Smash at 97.1 FM reported this morning on Claire McCaskill’s Bush Derangement Syndrome: 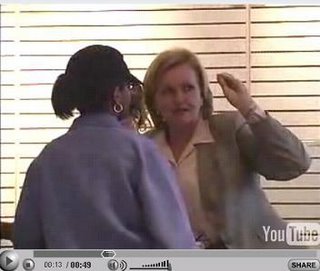 HERE is the YouTube report from the Democratic Meeting.
A local St. Louis blogger is attacked for airing video from a private democratic meeting and reporting Democratic Senatorial Candidate Claire McCaskill’s rant that, “George Bush let people die on rooftops because they were black!”

Here is that report from PubDef:

“I know I lost, but my opponents in my [State Rep] race had a big truck with video and signs too, and the turnout was still terrible,” said Palm. He said the Republicans have gimmicks too. “Talent lit the Arch up pink,” he said referring to Talent’s bill that authorized bathing the Gateway Arch in pink lights to bring attention to breast cancer.

McCaskill listened quietly to Palm and Leggette before taking the floor. In a spirited voice, she told them that she would do everything she could to make clear to every Democratic voter that “George Bush has no better friend than Jim Talent.”

“That’s what I’m talking about,” interrupted Palm. “Your people should be videotaping that right now!”

Don’t expect to see those comments by McCaskill in the local news or the liberal St. Louis Post Dispatch!

PubDef is now getting attacked for airing how the local democrats “really feel!”
Anonymous:

I hope the Republicans are paying you and your crew well Antonio French, because you are definitely not a friend of Democrats and your reporting was not intended to bring any Democrats together!!!!!

Who the hell invited you anyway?

Antonio French is really trying to become a problem for some people in St. Louis!

Don’t worry because Antonio French doesn’t care about anything anyway, except one thing.

Check out more of the comments. It’s unbelievable that Claire McCaskill can get away with these kind of comments!