Even in these uncertain times, over 90% of Iraqis want to see the establishment of a unity government. 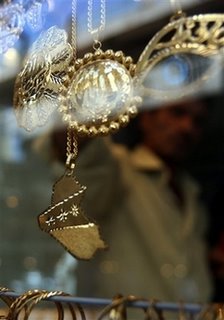 An Iraqi shopkeeper shows a gold-plated pendant in the shape of Iraq’s map, in a market, in Baghdad, Thursday Aug.31, 2006. At a time when sectarian violence and squabbling between politicians are pushing the country toward an uncertain future, Iraqi women are literally wearing Iraq around their neck. Iraq’s map in gold and silver has become a best seller in jewelry stores. (AP Photo/Khalid Mohammed)

Lawk Salih has the great reconstruction news from Iraq:

On Aug. 31, James Crum of the Iraq Project and Contracting Office released a statement on progress being made in Iraq’s reconstruction.

Throughout the past three years, “solid progress” has been made to rebuild Iraq’s infrastructure, according to Crum.
“All of Iraq’s industrial sectors – oil, water, electrical power, education, agriculture, buildings and facilities, and security – have benefited from the United States’ investment in their economic revitalization and reconstruction.”

Substantial investments have been made in the entire oil infrastructure system to help provide long-term stability, such as improvements to oil wells, pipelines and oil-refinement facilities.

U.S. projects have added or restored an estimated 2,700 Megawatts of electrical generation capacity to Iraq’s electrical grid. Peak electricity generation in Iraq is currently around 4,900 megawatts compared to an average of 4,300 in 2002.

“Power is more equitably distributed today, and on average Iraqis outside of Baghdad receive more hours of power than before the war,” Crum said.

“One of the key elements that enables Iraq to stand on its own is a strong and growing workforce,”

Since 2003, there have been 30,000 new businesses created in Iraq – many of these are small businesses and micro-enterprises, according to Crum.

Don’t expect to see this good news on the front page of any American newspaper any time soon.

Jim Hoft
Jim Hoft is the founder of The Gateway Pundit, one of the top conservative news outlets in America. Jim was awarded the Reed Irvine Accuracy in Media Award in 2013 and is the proud recipient of the Breitbart Award for Excellence in Online Journalism from the Americans for Prosperity Foundation in May 2016.
Kayleigh McAneny Leaves White House Press Hacks Speechless After Ending Presser with a Video of Police Kindness and Quote from Martin Luther King Jr. (Video)
Jacka$$ from South Africa Defends Looters "Black Americans are being Looted Every Day" (Video)
LOOTERS GET LOOTED: Video Compilation of Looters Stealing from Looters at Peaceful Protests Across America
"Community Organizer" Barack Obama Cheers "Protests" - Insists "Small Minority" Was Behind Looting, Torchings, Destruction of HUNDREDS of Businesses and Govt. Offices
Cowardly Tech Giants Release Statements Supporting Racial Equality -- Refuse to Condemn Mass Violence, Destruction, Lootings, Beatings (VIDEO)
See more...