Chavez and Ahmadinejad will meet up in Caracas later this month. 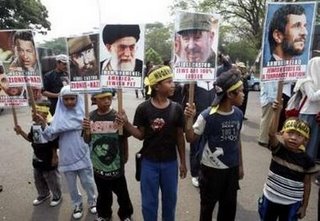 Iranian president Mahmoud Ahmadinejad will travel to Caracas, Venezuela, on an official visit after taking part in a United Nations General Assembly in New York on 19 September, Venezuelan president Hugo Chavez announced friday. The Islamic Republic and Venezuela have together with Cuba, Bolivia and Syria led international criticism of US foreign policy.