** Don’t you just love how the democrats and liberal media elitists always berate the modern day heroes who risk their lives everyday for the cause of freedom and democracy?

Afghanistan President Karzai was not having it today… 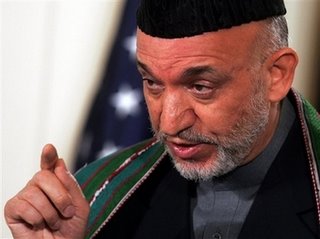 HotAir has the amazing video!

Mr. President, I was, the day before yesterday, in the Walter Reed Hospital. There I met wounded in Iraq and Afghanistan. And there also I met a woman soldier with six boys, from 7 to 21, that she had left behind in America in order to build us a road in a mountainous part of the country in Afghanistan. There’s nothing more that any nation can do for another country, to send a woman with children to Afghanistan to help. We are very grateful. I’m glad I came to know that story and I’ll be repeating it to the Afghan people once I go back to Afghanistan.

Ma’am, before I go to remarks by my brother, President Musharraf, terrorism was hurting us way before Iraq or September 11th. The President mentioned some examples of it. These extremist forces were killing people in Afghanistan and around for years, closing schools, burning mosques, killing children, uprooting vineyards, with vine trees, grapes hanging on them, forcing populations to poverty and misery.

They came to America on September 11th, but they were attacking you before September 11th in other parts of the world. We are a witness in Afghanistan to what they are and how they can hurt. You are a witness in New York. Do you forget people jumping off the 80th floor or 70th floor when the planes hit them? Can you imagine what it will be for a man or a woman to jump off that high? Who did that? And where are they now? And how do we fight them, how do we get rid of them, other than going after them? Should we wait for them to come and kill us again? That’s why we need more action around the world, in Afghanistan and elsewhere, to get them defeated — extremism, their allies, terrorists and the like.

Musing Minds has a couple of more thoughts.

The Futurist has more on this story.