9-11 is still a “cause celebre” for the jihadists… 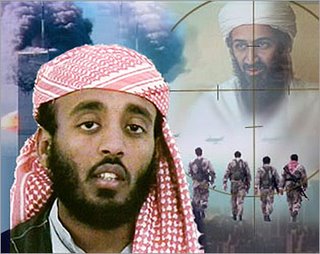 …This latest image from Aljazeera shows never before seen film of OBL with the 9-11 hijackers. The video was released by Al Qaeda for the 5 year anniversary of 9-11 as a recruitment tool for the jihadists.

According to previous reports from the mainstream media, Iraq is not Al Qaeda’s only “cause celebre” or “legal case to excite widespread interest”.
Here are a few others:

The recent suicide bombings in Saudi Arabia were announced on the site. The use of videos of attacks and murders of captives is considered a recruiting tool and good propaganda. The videos are rarely shown on English language web sites, as they are intended for the hard core terrorist audience. Al Qaeda knows that such videos will turn off many in the West, but has found that it does wonders for al Qaeda recruiting and contributions.

September 2004- Al Qaeda uses the slaughter at the Beslan grade school in North Ossetia as a terrorist recruiting tool:

Al-Qaida is using the recent deadly hostage crisis at a Russian school as a recruiting tool, even though there’s no direct evidence linking Osama bin Laden’s terror network to the attack carried out by Chechen rebels, NBC News reported Tuesday.

Al Qaeda confederates, such as the Ansar al-Islam terror network operating inside Iraq, have incorporated the pictures from Abu Ghraib into their recruiting literature. Abu Musab al-Zarqawi’s Tawhid and Jihad movement has also benefitted from the Abu Ghraib scandal, citing abuses of Iraqi women there as the justification for the kidnapping and beheading of several Western hostages. It is clear that Abu Ghraib has given Iraqi insurgents—and, potentially, terrorists around the world—a new raison d’etre.

March 2005- Terrorists use Chechnya as a recruiting tool:

Long before the Chechen massacre, in November 2003 the Shariah Council of State Defense Council (Majlis al-Shura) of the Chechen Republic of Ichkeria declared that “jihad for Chechnya and its neighbors today is mandatory.” Yet Udugov is declaring jihad only now? What have they been fighting all this time? The fact that he would issue this statement this week, with all the evidence that the Chechen jihad has been raging for years, is another indication of how jihadists use current events as pretexts to justify what they are doing.

He (Senator Biden) then turned to the incidents concerning Quran ‘mishandling’, or as media elitists like to write, ‘desecration’, Gitmo, and Abu Ghraib. He postulates that they have, “become the greatest propaganda tool that exists for recruiting terrorists around the world. And it is unnecessary to be in that position.”

June 2005- “Stain” of Gitmo is a primary recruiting tool:

Meanwhile, Vermont Sen. Patrick Leahy (search), the ranking Democrat on the Senate Judiciary Committee, said on the Senate floor Monday that much goes on at the American naval base in Cuba that is unknown to the general public and that the administration’s standard line of “trust us” is no longer valid.

…”Guantanamo has not made our country safer,” Leahy said. “It is increasingly clear that the administration’s policies have seriously damaged our reputation in the world and that they are making us less safe. The stain of Guantanamo has become the primary recruiting tool for our enemies.”

November 2006- Extremists use earthquake relief as a recruiting tool:

The Pakistani religious parties (namely the Jamaat-I-islami) and extremist groups (Jamaat ul-dawa–formerly the Lashkar-eTayyiba) have definitely taken advantage of the situation to try to win support from the population. They were the first to get into the affected areas and are experienced in social work, whereas the political parties in the area are not and have bearly been visible.

Al Qaeda has signaled its intent to use the war in Lebanon as a recruitment tool, despite the ideological gulf between its Sunni Muslim leaders and the Shi’ite Hezbollah militants fighting Israel.

Arab security analysts said a video from al Qaeda number two Ayman al-Zawahri on Thursday, in which he urged Muslims to “fight and become martyrs” in response to the conflict in Lebanon, would strike a chord with some on the Arab street.

In August it was Lebanon… 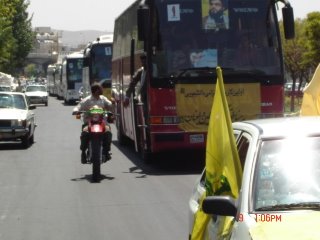 Al Qaeda and Hezbollah both used the war in Lebanon as a terrorist recruitment tool. Here a bus convoy takes off from Iran to the Lebanese front.
(What do you suppose ever happened to this bunch?)

September 2006- Paintball is used as a recruiting tool:

When the Muslim Paintball Games of Kentucky lists as one of its competitors a name containing the term “Al-Mujahid” [The Holy Warrior], this must be questioned. And when the Muslim American Society of Tampa (MAS-Tampa), a group that has published on its website material concerning the murder of non-Muslims, puts out a paintball event flyer stating, “We’re trying to sep
arate the men from the Boys, The guns from the toys, The real ones from things that just make noise,” this too must be questioned. Are these groups out to have fun, or is it something else?

Today- September 27, 2006- Al Qaeda announces that it will release a tape by al Zawahiri on the pope… this month’s “Cause Celebre” for the Islamofascists.

Now, the media is backpedaling, saying that it is not just Iraq but… “corrupt and unjust governments in Muslim-majority countries, and pervasive anti-U.S. sentiment among most Muslims.”

A Jacksonian offers an extensive discussion on the NIE leaked docments.