82 years after Democrats voted to support the Ku Klux Klan, the Democratic Party is finally taking a look at racism inside the party. 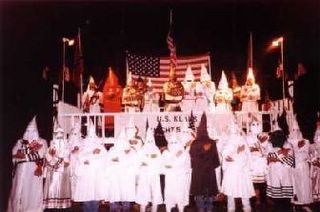 It looks like several democratic party leaders are finally taking a look at the ugly, racist, and anti-Semitic tirades that are all too common on the Left.

Here is a look back at the Democratic Convention of 1924 where democrats gave their OK to the KKK:

The Democratic party was an uneasy coalition of diverse elements: Northerners and Southerners, Westerners and Easterners, Catholics and Jews and Protestants, conservative landowners and agrarian radicals, progressives and big city machines, urban cosmopolitans and small-town traditionalists. On one side were defenders of the Ku Klux Klan, prohibition, and fundamentalism. On the other side were northeastern Catholics and Jewish immigrants and their children. A series of issues that bitterly divided the country during the early 1920s were on display at the 1924 Democratic Convention in New York, including prohibition and religious and racial tolerance. The Northeasterners wanted an explicit condemnation of the Ku Klux Klan. The final vote was 546.15 for the Klan, 542.85 against it.

The two leading candidates symbolized a deep cultural divide. Al Smith, New York’s governor, was a Catholic and an opponent of prohibition and was bitterly opposed by Democrats in the South and West. Former Treasury Secretary William Gibbs McAdoo, a Protestant, defended prohibition and refused to repudiate the Ku Klux Klan, making himself unacceptable to Catholics and Jews in the Northeast.

Newspapers called the convention a “Klanbake,” as pro-Klan and anti-Klan delegates wrangled bitterly over the party platform.

Is it no wonder, then, that democrats do not want this Black Republican radio ad (posted previously) on the airwaves?

The AP did not do a very good job researching the Democratic Party’s connections to the KKK. In a response to the Black Republican ad AP writer, Kristan Wyatt, says:

In the ad, the woman goes on to say, “Democrats passed those black codes and Jim Crow laws. Democrats started the Ku Klux Klan.” Her companion replies, “The Klan? White hoods and sheets?”

The KKK, never a political party, was a racist group of white men that started in the South after the Civil War, when Republicans were almost unheard of in former Confederate states. The mainstream Democratic Party never endorsed the Klan nor claimed to have founded it.

Obviously, the fact that democrats actually voted to endorse the KKK in 1924 would make this AP report factually incorrect.

La Shawn Barber shares her thoughts on the uproar over the radio ad.

But regardless of their own KKK history, the democrats will always use accusations of racism in their personal attacks on Republicans.