So are Iraqis staying home because of the violence? You be the judge! 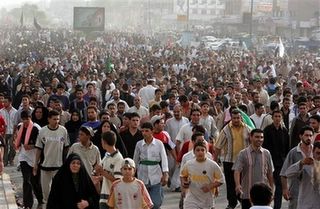 Iraqi Shiites pilgrims march toward the Imam Mousa al-Kadim shrine, for the annual commemoration of the saint’s death, in Shiite district of Kazimiyah, in Baghdad, Iraq, Sunday Aug. 20, 2006. Thousands of pilgrims chanting religious slogans walked shoulder-to-shoulder down a boulevard to a Shiite shrine Sunday for an annual ritual of grief, held under rigorous security including a ban on private vehicles to prevent car bombs. (AP Photo/Karim Kadim)

On Saturday, the New York Times reported in dramatic fashion that:
Fearful Iraqis Avoid Mosques as Attacks Rise
…Er-Um… Except of course this bunch!

It didn’t look that way this past weekend for the celebration day of a Shiite saint. 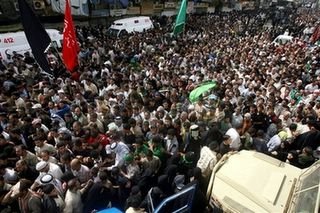 Tens of thousand Iraqi Shiites Muslims march to the shrine of Imam Moussa Kadhim, for the annual commemoration of the saint’s death, gets treated in a hospital in Baghdad, Iraq, Sunday Aug. 20, 2006. (AP Photo/Hadi Mizban)

Last year this weekend saw the largest loss of life since Saddam was in power. Over 1,000 worshippers were trampled on a bridge outside the Imam Mousa al-Kadim shrine in Baghdad. 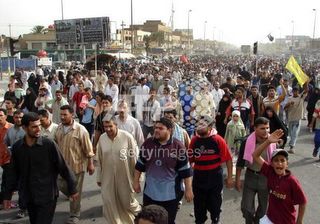