“The letter urges Blair to change foreign policy to show the UK values the lives of civilians.” (BBC) 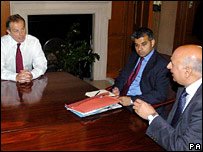 Tony Blair gets an earful from MPs Sadiq Khan and Mohammed Sarwar at a meeting in London. (BBC)

In a bold and shocking move, Islamic leaders in Great Britain wrote the Prime Minister (letter here via The Telegraph) blaming the the Blair government for putting British lives at increased risk!

“As British Muslims we urge you to do more to fight against all those who target civilians with violence, whenever and wherever that happens. It is our view that current British government policy risks putting civilians at increased risk both in the U.K. and abroad.

“To combat terror the government has focused extensively on domestic legislation. While some of this will have an impact, the government must not ignore the role of its foreign policy.

“The debacle of Iraq and the failure to do more to secure an immediate end to the attacks on civilians in the Middle East not only increases the risk to ordinary people in that region, it is also ammunition to extremists who threaten us all.

“Attacking civilians is never justified. This message is a global one. We urge the prime minister to redouble his efforts to tackle terror and extremism and change our foreign policy to show the world that we value the lives of civilians wherever they live and whatever their religion. Such a move would make us all safer.”

“Current policy on the Middle East is seen by almost everyone I speak to as unfair and unjust. Such a sense of injustice plays into the hands of extremists.”

“Where you forget about right and wrong, where you think two wrongs equals a right … those events are diminishing my ability to put forward arguments against extremism”.

A spokesman for the dismayed Blair government responded:

“Al-Qaida starting killing innocent civilians in the 90s. It killed Muslim civilians even before 9/11, and the attacks on New York and Washington killed over 3,000 people before Iraq. To imply al-Qaida is driven by an honest disagreement over foreign policy is a mistake.“

An outrageous and bold mistake at that! 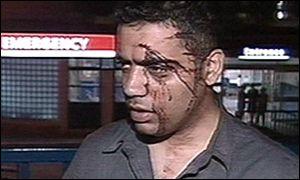 If only the Blair government would change its direction, the Young Muslim Males (and young Muslim mothers!) could put down their bombs and go back to playing cricket, going to student senate meetings, and hanging out with their supermodel sister.

Powerline has more on this offensive letter.

Betsy has the impressive words from the new British Foreign Secretary, Margaret Beckett.