Two Americans- One a Soldier, One a Farmer -Are Killed In Israel 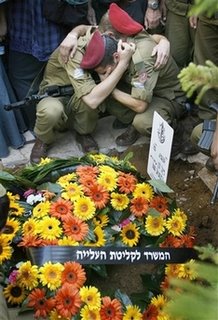 His death came one day after his parents and two sisters were cheered by an overflow crowd at a pro-Israel rally Monday night at Shir Ami congregation in Newtown, Pennsylvania. The ovation came after a speaker recognized their son’s service, reducing his mother, Harriet, to tears.

“As one, 1,200 people stood up and gave the loudest and longest salute to this family,” said Schnitzer, of Congregation Tifereth Israel in Bensalem, where the family worshipped.

“A day later, I have to tell the family that their son and brother had been killed in action.”

Levin will be buried this afternoon in Mount Herzl Cemetery in Jerusalem – Israel’s equivalent of Arlington National – amid soldiers, prime ministers and presidents, said Jay Podolsky, director of the Bucks County chapter of the Jewish Federation of Greater Philadelphia. A local memorial service will be held at 7:30 p.m. Monday at Shir Ami, Bucks County’s largest synagogue, to accommodate the crowd that is expected.

According to the Washington Post… Israeli immigration and military officials estimate that about 120 Americans are among the 2,300 lone soldiers (soldiers without their families in Israel) serving in the Israeli military.

David M. Lelchook, was struck and killed by a Hezbollah missile in Israel while returning home from an orchard where he worked:

Lelchook, 52, a Cornell University graduate with a degree in agriculture, was riding his bike back from the pomelo orchards that he managed when a missile struck the Kibbutz Sa’ar, a communal farm where he lived near the coastal resort of Nahariya.

The Newton South High graduate defined bravery in the last weeks of his life as he and those around him carried on with daily life under the constant threat of rocket fire, his bereaved relatives in Newton said. He was afraid, but stayed put, committed to his kibbutz, his wife and the life they’d built there.