A member of Hezbollah admitted to the Russian news service Izvestia on Thursday that Iran and Syria helped with the “victory” over Israel.

Meanwhile, at Friday prayers in Tehran… 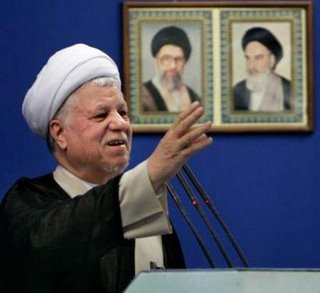 The former Iranian president warned the US not to confront Tehran but to learn from the War in Lebanon:

“We expect America to have learned enough (from the Israel-Hezbollah war) not to enter another game and upset the security of the region,” Rafsanjani said in his Friday prayer sermon carried live on state radio.

The former president said the United States would be wise to try and resolve its nuclear standoff with Iran through negotiations.

Washington said Thursday it will move quickly for UN Security Council action on sanctions against Iran if Tehran refuses to halt its sensitive uranium enrichment work by August 31, as demanded by a UN resolution.

The United States and other Western countries suspect that Iran is enriching uranium to use in nuclear weapons. Iran insists the program is to make fuel for civilian reactors.

Elsewhere in the region, Kurds have fled their homes in the northern frontier region of Iraq after four days of shelling by the Iranian army.