Here is that video from today’s White House briefing. 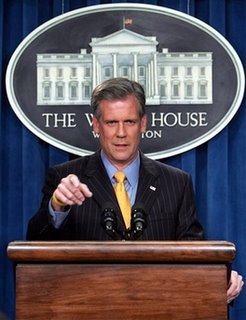 Here is how Tony Blair explained Vice President Cheney’s remarks after the UK terror arrests from last week that had the left up in arms:

Question: The Vice President today said that “The Dean Democrats have defeated Joe Lieberman. Their choice instead is a candidate whose explicit goal is to give up the fight against the terrorists in Iraq.”

Why is the Vice President making such comments? And does he support Senator Lieberman’s independence?

MR. SNOW: No. Number one, we are not making any endorsement in Connecticut. The Republican Party of Connecticut has suggested that we not make an endorsement in that race, and so we’re not. We are certainly not going to be endorsing between Joe Lieberman and Ned Lamont because both of them are going to caucus as Democrats if they’re elected to the United States Senate.

But as we were talking about last week, Ned Lamont ran on a campaign of getting out of Iraq, period; getting out. You have to ask yourself at a time of choosing what this does in the war on terror, what the consequences of that are going to be. Does this help the people of Iraq or does it create a power vacuum?

Does it, in fact, support Osama bin Laden’s comments — and I want to thank one of your colleagues for setting me right on this; it was after Mogadishu, when we left Mogadishu (on the insistence of John Murtha)– that the Americans, you stay at them long enough, they’re going to lose their will…

(Here’s what Osama said exactly in 2002: “We experienced the Americans through our brothers who went into combat against them in Somalia, for example. We found they had no power worthy of mention. There was a huge aura over America — the United States — that terrified people even before they entered combat. Our brothers who were here in Afghanistan tested them, and together with some of the mujahedeen in Somalia, God granted them victory. America exited dragging its tails in failure, defeat, and ruin, caring for nothing.

America left faster than anyone expected. It forgot all that tremendous media fanfare about the new world order, that it is the master of that order, and that it does whatever it wants. It forgot all of these propositions, gathered up its army, and withdrew in defeat, thanks be to God.”)

…They’re going to walk away — and he used that as inspiration to persuade people to conduct the September 11th attacks.

So it is important to understand what the consequences of an idea are. And I think the Vice President was well within his rights, and I think correct, in making that analysis and assessment. But in terms of the race, the Connecticut Republican Party has asked us to stand down on it, so we will.