I just spoke to my dad who is In Baghdad for a few days. He told me with extreme excitement and enthusiasm in his voice that there have been no terrorist incidences for 2 days now. This reconciliation conference (taking place Thursday & Friday) is really having an affect. The only negative activity appears to be of a criminal nature. A city of 3-5 million will have some criminal activity don’t you think?

Our soldiers along with the Iraqi security forces (who we trained) and the reconciliation conference seem to be hitting the mark in bringing stability and security to the last hot area in Iraq, Baghdad, and the surrounding areas. I hope and pray this continues and brings results.

(Updates to this post, below)
Operation Together Forward is obviously getting results. 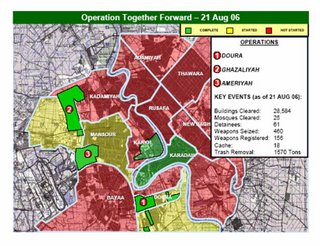 Via the Multi-National Force weekly press briefing on Tuesday, August 22, 2006, Major General William Caldwell shared some of the good security news from the past week including the big news that Coalition and Iraqi forced captured “well over” 100 known Al Qaeda terrorists and associates in the last week!

** It is very strange that the New York Times poll says that 51% of Americans see no connection between Iraq and the “Terror Fight” when “well over” 100 Al Qaeda operatives were arrested in Iraq in just one week!… Explain that?!!

Anyway, here is more from the press briefing:

Let me just recap a few of these that occurred just over this past week.
In Ramadi, coalition forces captured a Saudi al Qaeda member who was actively conducting terrorist activities. During the early morning raid, one terrorist was captured and 14 others detained. The raid uncovered a suicide vest, multiple small arms and armament, along with a vehicle-borne improvised explosive device.

Two more wanted terrorists were detained in another Ramadi operation. One was associated with harboring and transporting senior foreign al Qaeda leaders into Iraq, and the other was known to harbor terrorists responsible for attacks on Iraqi citizens and coalition forces.

In the Baghdad area, recent raids led to the capturing of a suspected IED cell leader, who was also suspected of a shooting death of one Iraqi interpreter and one coalition force soldier, as well as two others, wanted al Qaeda terrorists, believed to have had direct association with several recent vehicle-borne improvised explosive devices here in the city of Baghdad.

Operations in Arabjabu (ph) led to the capture of two wanted terrorists associated with a senior al Qaeda and Iraq leader and part of the cell specializing in bomb making and vehicle-borne improvised explosive device. Again, all associated with attacks here in the city of Baghdad.

Near Tikrit, two terrorists and three suspects were captured, one who reportedly controlled the 40 other terrorists in the area. Credible intelligence also indicated that his terrorist cell is involved in the movement of foreign fighters into Gogee (ph) area. Reliable intelligence also indicates that the other terrorists captured in Tikrit is directly linked to the February 22nd bombing of the al-Askariya Mosque in Samarra and was involved with other violent attacks here within the country of Iraq.

And, from the Iraqi newspaper, Almowaten, Haider Ajina translated this news:

Mr. Muhamed Alaskari, official spokesman for the Iraqi department of defense, said, “Armed attacks have substantial decline, about a 70% decline compared to the last few weeks.”

Alaskari in his defense department weekly press conference added, “Security operations from August 14 to the 21 have resulted in the arrest of 14 armed individuals and 439 suspects, the defusing of one car loaded with four barrels filled with TNT, the launch of 1679 patrols, the defusing of 21 bombs, the set up of 679 control points, and the set up of 257 traps”. Alaskari then added, “the security operation to protect the pilgrims to Al-Kadhemiah was successful. Iraqi forces have tightened the noose around the armed groups, and have substantially controlled explosive belt attacks. 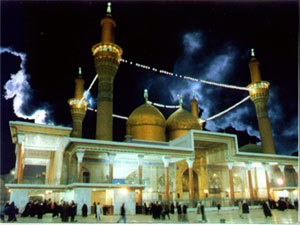 The Musa al-Kadhim Shrine in the Kadhimiya neighborhood of Baghdad is one of the oldest Shi’a sites in Baghdad. (MNF-Iraq)

Although, the brothers at Iraq the Model are understandably impatient with the security progress, this past weekend was a tremendous demonstration of the increased capabilities of the Iraq security forces and the leadership of the Government of Iraq. Both Iraqi Sunni and Shiite leaders actively supported the security plan and communicated details of it to the populace to help ensure a peaceful pilgrimage to the shrine of eighth-century imam Musa al-Kadhim.

Don’t expect to see this on your evening news!

Violence in Baghdad has declined in the past two weeks and all but ended in some formerly deadly neighborhoods, the U.S. military said in a cautiously upbeat report on Tuesday on a major security clampdown in the city…

Zalmay Khalilzad at the Opinion Journal describes the tactics that will drive toward the goal of achieving security neighborhood by neighborhood in Iraq.