Will the new data released by the Defense Department today force John Murtha to call for a Cut and Run from the City of Brotherly Love, too?

The quagmire may be closer to home than John Murtha thinks!
…And, I’m not talking about Okinawa! 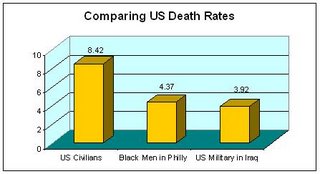 Young black males have a greater chance of being murdered in Philadelphia than a US soldier has of getting killed in the Iraq!
From the Washington Post:

Between March 21, 2003, when the first military death was recorded in Iraq, and March 31, 2006, there were 2,321 deaths among American troops in Iraq. Seventy-nine percent were a result of action by hostile forces. Troops spent a total of 592,002 “person-years” in Iraq during this period. The ratio of deaths to person-years, .00392, or 3.92 deaths per 1,000 person-years, is the death rate of military personnel in Iraq.

How does this rate compare with that in other groups? One meaningful comparison is to the civilian population of the United States. That rate was 8.42 per 1,000 in 2003, more than twice that for military personnel in Iraq.

The comparison is imperfect, of course, because a much higher fraction of the American population is elderly and subject to higher death rates from degenerative diseases. The death rate for U.S. men ages 18 to 39 in 2003 was 1.53 per 1,000 — 39 percent of that of troops in Iraq.

But one can also find something equivalent to combat conditions on home soil. The death rate for African American men ages 20 to 34 in Philadelphia was 4.37 per 1,000 in 2002, 11 percent higher than among troops in Iraq. Slightly more than half the Philadelphia deaths were homicides.

Murtha has yet to call for a Cut and Run from Philly.
…Maybe he can redeploy Philly to Okinawa, too! The Okinawa Eagles??

Brothers Judd: Does this mean that the refusal to reinstate the draft is a racist policy?

RedState says this is different from other casualty analysis in that it provides numbers.
The Belmont Club shares some interesting figures from a statistical analysis of British casualties in Iraq.