So who is Waheed Zaman, one of the terror suspects arrested in London yesterday, a biochemistry student who believed in Integration?

LGF has this…
His sister, Safeena, had this to say about her 22 year old younger brother:

“He loves fish and chips and Liverpool football club and his favourite TV programme is Only Fools and Horses. He even wanted to join the police as a forensics expert. He is a great believer in the importance of integration between our community and the Western world.” 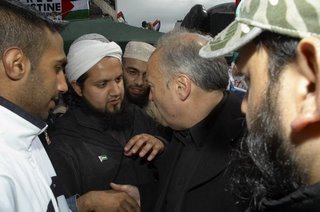 George Galloway talks to well wishers at Free Palestine Demonstration in May 2005 in London.

The Times online had more on Mr. Zaman:

Mr Zaman is a biomedical science student and a well-known political activist. He is head of the Islam Society at London Metropolitan University and is reported to have spoken at Muslim rallies and written a number of articles about Islam for the student magazine.

His older sister, Safeena Zaman, 24, defended her brother in an interview with The Sun. She said he was proud of being British.

She said: “He loves fish and chips and Liverpool Football Club and his favourite TV programme was Only Fools and Horses. He even wanted to join the police as a forensics expert.

“As part of his work with the Islamic Society at university he would organise Muslim events and would often give talks. He is a great believer in the importance of integration between our community and the Western world.”

According to a report in London’s Evening Standard Mr Zaman and other suspects in the area attended the Edinburgh Road Primary School.

The Online Sun has this shocking news about Waheed:

Safeena, 24, said of her 23-year-old brother: “He saw it as his duty to stand up for his community and that’s what led him to know George Galloway. He has a lot of respect for him and has met him many times.”

A spokesman for MP Galloway, above, said: “Waheed Zaman is not a name that George is familiar with. He is not known to him on a personal level.”

Waheed is also a member of the Student Senate (PDF) at London Metropolitan University.

And… Just yesterday Mr. Galloway compared the Bush-Blair relationship to the same kind of relationship that Ms. Lewinsky had with the former U.S. president. It’s dishonorable, disreputable, unequal, and humiliating!
Hat Tip Larwyn