After his sentencing this weekend, elementary teacher Ali Asad Chandia “pledged to exact revenge against the prosecutors in the afterlife.”

A picture of Ali Asad Chandia declaring his innocence from Ali Asad Support Committee before he was found guilty and sentenced to 15 years for providing support to a terrorist organization.

Prairie Pundit carried this news from the Washington Times on the weekend:

A federal judge yesterday sentenced a former third-grade teacher at a Muslim school in Maryland to 15 years in prison for providing support to a terrorist organization known as the “Virginia jihad network,” which used paintball games to train for a holy war.

At the sentencing hearing before U.S. District Judge Claude Hilton, Ali Asad Chandia maintained his innocence and pledged to exact revenge against prosecutors in the afterlife, saying that “those who participated in making my children orphans … should just remember that the day of judgment is on the way.”

Chandia, 29, who taught at the Al-Huda School in College Park, was convicted in June on three counts of providing material support in what prosecutors called a scheme by Islamic extremists to use force to drive India out of the disputed Kashmir territory in South Asia. A federal jury acquitted him of a fourth count of supporting terrorists.

The 41-count federal grand jury indictment handed up in U.S. District Court in Alexandria in June 2003 accused Chandia and the others of conspiracy to “prepare for and engage in violent jihad” against foreign targets in Kashmir, the Philippines and Chechnya. Nine were identified as U.S. citizens.

…Prosecutors said the men, who also trained in St. Louis, attended classes hosted by Al-Timimi, an Islamic lecturer in Fairfax and the son of Iraqi immigrants. He reportedly advised them to go overseas after the September 11 attacks. 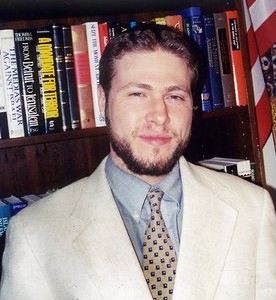 CAIR Communications Specialist and AK47 packing Randall (“Ismail”) Royer, an American convert to Islam and St. Louis native, was earlier sentenced for his role in the terror plot.

Royer was more than just your average communications specialist for CAIR, as Daniel Pipes wrote about back in 2003:

Royer joined the Pakistani group Lashkar-e-Taiba, traveled to Pakistan, done propaganda work for it, and “fired at Indian positions in Kashmir.” In addition, the indictment also states that Royer “possessed in his automobile an AK-47-style rifle and 219 rounds of ammunition” in September 2001. The grand jury charges that Royer “did unlawfully and knowingly begin, provide for, prepare a means for, and take part in a military expedition and enterprise to be carried on from the United States against the territory and dominion of India, a foreign state with whom the United States was at peace.”

It’s also worth noting that Royer was working for the Council on American-Islamic Relations (CAIR), militant Islam’s most aggressive political organization in North America, when he began training with Lashkar-e-Taiba. (He served there variously as a communications specialist and a civil rights coordinator; see an IslamOnline “Live Dialogue” for him sharing a by-line with CAIR’s executive director, Nihad Awad.) This means that CAIR now has a record of at least two former employees indicted and arrested in 2003 on terrorism charges; the other was Bassem Khafagi, CAIR’s director of community relations before his arrest this January. Oh, and one must not forget that a member of CAIR’s advisory board, Siraj Wahhaj, was named as one of the “unindicted persons who may be alleged as co-conspirators” in the attempt to blow up New York City monuments nearly a decade ago. So, CAIR not only apologizes for terrorism but is now implicitly accused of having more direct links to it. (June 27, 2003)

The CAIR communications specialist, Randall Royer, was sentenced in 2004 for “convictions on charges stemming from their participation in a network of militant jihadists centered in Northern Virginia.”