Stolen US cars are somehow ending up in the hands of Al Qaeda in Iraq…
And used in their suicide bombings. 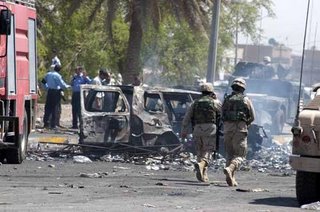 US troops are finding stolen cars from the United States used in suicide attacks in Iraq, including attacks by the late Abu Musab Al Zarqawi:

The FBI’s counterterrorism unit has launched a broad investigation of US-based theft rings after discovering that some of the vehicles used in deadly car bombings in Iraq, including attacks that killed US troops and Iraqi civilians, were probably stolen in the United States, according to senior government officials.

Inspector John E. Lewis, deputy assistant director of the FBI for counterterrorism, told the Globe that the investigation hasn’t yielded any evidence that the vehicles were stolen specifically for car bombings. But there is evidence, he said, that the cars were smuggled from the United States as part of a widespread criminal network that includes terrorists and insurgents.

Cracking the car theft rings and tracing the cars could help identify the leaders of insurgent forces in Iraq and shut down at least one of the means they use to attack the US-led coalition and the Iraqi government, the officials said.

The inquiry began after coalition troops raided a bomb-making factory in Fallujah last November and found a sport utility vehicle registered in Texas that was being prepared for a bombing mission.

Investigators said they are comparing several other cases where vehicles evidently stolen in the United States wound up in Syria or other Middle East countries and ultimately into the hands of Iraqi insurgent groups — including Al Qaeda in Iraq, led by Jordanian-born Abu Musab Al Zarqawi.

Investigators believe the cars were stolen by local car thieves in US cities, then smuggled to waiting ships at ports in Los Angeles, Seattle, and Houston, among other cities. From there they are shipped to black-market dealers all over the world, including in places like Syria where foreign militants fighting in Iraq are thought to be transiting from countries across the region and where they gain critical logistical support.

In March of this year a Pakistani truck driver was arrested and confessed to transporting stolen cars from Syria into Iraq.

Stolen United Nations cars have also been used in suicide attacks against US troops in Iraq.

A US soldier on Sean Hannity today claimed that that Allied forces are still finding US cars in Iraq.