The family of Steve Centanni made a plea to his captors for his release,
FOX VIDEO HERE.

FOX journalists Steve Centanni and Olaf Wiig were kidnapped on Monday August 16, 2006 in the Gaza Strip. 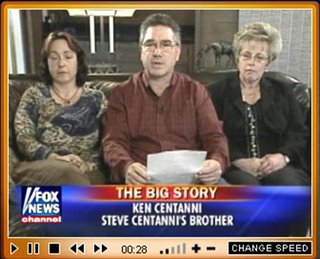 About 30 Palestinian journalists protested today for the release of Steve Centanni, 60, and cameraman Olaf Wiig, 36:

About 30 members of the Palestinian journalists’ union gathered outside the parliamentary building in Gaza, holding up signs demanding that the men be freed. Other signs called for security in Gaza, where armed men wander the streets freely.

Jennifer Griffin, chief Fox News correspondent for the Middle East, called the kidnapping a “test for the Palestinian people.”

More than two dozen foreigners have been abducted by Palestinian gunmen, usually in an attempt to settle personal scores, but almost all have been released within hours.