Later today Reuters came out with an attack piece on the president for using the words “Islamic Fascists.”

But, If they wanted to defend Islam, you’d think Reuters would have found someone who did not organize and speak at a tribute to “the great Islamic visionary,” the Ayatollah Khomeini. 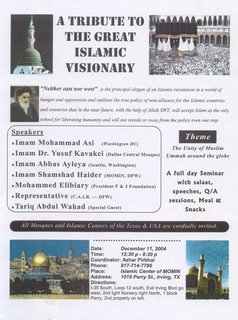 “Neither east nor west” is the principle slogan of the Islamic Revolution in a world of hunger and oppression and outlines the true policy of non-alliance for the Islamic countries and countries that in the near future with the help of Allah SWT will accept Islam as the only school for liberating humanity and will not recede or sway from the policy even one step.”

The radical Islamists that Reuters recruited to blast Bush did not appreciate the president’s definition of the war against Islamic Fascists:

U.S. Muslim groups criticized President Bush on Thursday for calling a foiled plot to blow up airplanes part of a “war with Islamic fascists,” saying the term could inflame anti-Muslim tensions.

“We believe this is an ill-advised term and we believe that it is counterproductive to associate Islam or Muslims with fascism,” said Nihad Awad, executive director of the Council on American-Islamic Relations advocacy group.

“We’ve got Osama bin Laden hijacking the religion in order to define it one way. … We feel the president and anyone who’s using these kinds of terminologies is hijacking it too from a different side,” he said.

“The president’s use of the language is going to ratchet up the hate meter, but I think it would have caused much more damage if he had done this after 9/11,” Elibiary said, adding that tensions were not running as high as they had been in the immediate aftermath of the 2001 attacks.

Mohamed Elibiary is one of the Radical US Islamists who spoke at and organized the gala event held in December 2004 that went completely unnoticed the mainstream news at the time: a tribute to “the great Islamic visionary,” the Ayatollah Khomeini.

Jihad Watch covered the story back in 2004 and had much more on the conference. “Elibiary says he didn’t know it was to be a Khomeini tribute(?) Looking at the poster above, what he did think it was about.”

But that didn’t matter to Reuters!