The crash follows another crash two months ago that killed 124 in Irkutsk in Siberia. 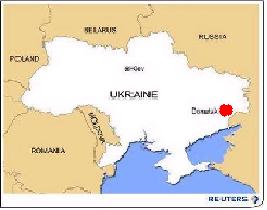 Here are the initial reports from the plane that crashed in Eastern Ukraine:

The Tupolev-154 was flying from southern Russia to the country’s second city of St Petersburg when it disappeared from radar.

Thirty bodies have been found at the crash site, about 45km (30 miles) north of Donetsk, the ministry told Reuters.

Ukraine’s Emergencies Ministry told Reuters news agency the airliner had crashed in flames. Rescue workers were heading to the scene.

The plane had 160 passengers and 10 crew on board, and was travelling from the Black Sea resort of Anapa, the Emergencies Ministry said.

RIA Novosti reports… “The plane sent a SOS signal at 15:37 local time and vanished from the screens two minutes later.”

Interfax is reporting that turbulence caused the plane to crash.