Before the election, Lestist Mexican presidential candidate Lopez Obrador repeatedly stated he’d respect the IFE’s final decision, even if it meant he lost…
“because he’s a democrat”. 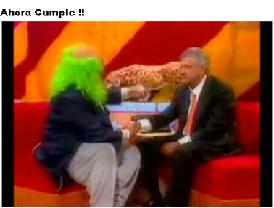 Fausta has the video collection of Obrador’s several promises… even the one he made to a clown!
(44 second video)

But, that was before he lost the election…

In the past several days the Leftist presidential candidate’s speech has turned from talk of recounts to threats against the winner Calderon:

Beyond his criticism of the country’s electoral authorities, his constant snipes at Vicente Fox, the outgoing president, and his insistence that the July 2 vote was fraudulent, the thrust of the leftwing candidate’s speech contained a notable change of tone.

“Never again will we allow them to install an illegal and illegitimate government in our country,” he told a baying crowd. “Here and now begins a new period in Mexico…with the sovereign power of the people we will undertake the changes and transformations that this country needs.”

For Jorge Zepeda, a political analyst in Mexico City, the speech signaled the start of a more radical phase in Mr López Obrador’s campaign to revert the result of last month’s election.

For the first time since election day, for example, Mr López Obrador concentrated less on claims of election fraud and more on what he would do once Mr Calderón, candidate for Mr Fox’s National Action Party (PAN) was named president-elect.

These included mounting protests at every one of Mr Calderón’s public acts, and holding another rally in the Zócalo on September 16 – the same day that Mexico’s armed forces traditionally parade in the square to mark the country’s independence. He also said his blockade of Paseo de la Reforma, a central avenue in Mexico City, could last for years. 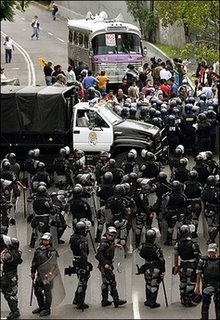 Riot police block the street in front of the Mexican Chamber of Deputies during a protest by supporters of leftist presidential candidate Andres Manuel Lopez Obrador in Mexico City. (AFP)

Despite his promises before the general elections, the Leftist Lopez Obrador continues to hold massive rallies in the Mexican capital. The rallies have been peaceful for the most part but at the rally on Monday in Mexico City his supporters clashed with police:

If declared the victor, Mr Calderon “will be a president under siege… he will not be able to operate outside his office”, said Gerardo Fernandez, of the left-wing Democratic Revolution Party (PRD).

Protesters have also pledged to disrupt outgoing President Vicente Fox’s last state-of-the-nation address on 1 September. The day “will not be a picnic”, Mr Fernandez said.

Mr Lopez Obrador’s supporters clashed with police outside the Congress building on Tuesday, for the first time since they began camping out in Mexico City in protest at the election result.

At least eight people were injured in the scuffles which only lasted a few minutes but saw police use batons and teargas to break up the crowd. 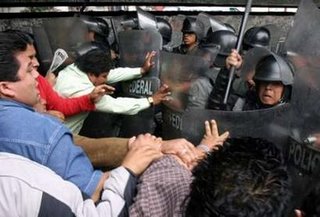 Federal riot police and supporters of Andres Manuel Lopez Obrador clash near the National Assembly after police stopped the demonstrators from setting up a sit in protest outside the assembly in Mexico City August 14, 2006. (REUTERS)

Mark in Mexico has an update on the current recount taking place.