Ahmad Batebi, Iran’s most noted political activist, was re-arrested in Tehran in late July. His family was told that he will be held at Evin Prison for 9 more years.
He has been on a hunger strike since his re-arrest. 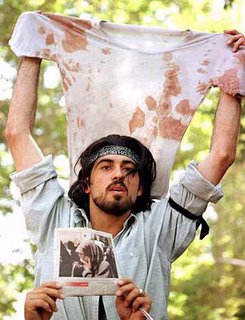 The doctor attending to Ahmad Batebi sends this sad news on his condition, Via Roos Online:

Ahmad Batebi was arrested along with other students during a protest at Tehran University dormitories. In 1999 he was tried and sentenced to prison till 2005 on charges of undermining national security. After spending 17 months in solitary confinement in the anti-Sabotage Committee prison ,he transferred to Evin prison.

Tried in a partial court, he was initially sentenced to death, and then to 15 years in prison. Earlier this year prison authorities gave him a 5-day leave to attend a wedding, after which he returned to prison. In March this year, he was given leave on the occasion of the New Iranian year, along with many other prisoners as has been customary for many years. Because of his very poor physical and mental health, he could not return to prison at the end of the leave.

Before his re-arrest and return to Evin, Batebi spent most of his time outside prison under medical care, undergoing physical therapy every day and taking medicine. In prison Batebi repeatedly suffered from kidney and urinary track infections and because of lack of proper medical treatment, these have now taken a chronic form. Because of poor food and nervous issues, he also suffers from ulcers. 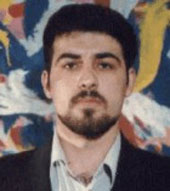 During Batebi’s first prison term when he was subjected to torture and other inhuman pressures, he also developed other injuries and disorders. He has lost a number of his teeth, he has ear problems and his eye sight has been impaired. The pain and torture that Batebi went through which he partly described in a letter to Judiciary authorities in which he retold how he was tied to a water pipe of the building and forced under sewage water until he could not breath any longer, while being beaten with military boots, tells only part of the story.

The MRI image that I have obtained from his spine, clearly shows his damaged vertebrae numbers 4 and 5. In response to how they could have happened, Batebi said, “One day as he was standing facing a wall with my hands pressing against the wall, I looked from under my blinds. A moment later a guard kicked me in the back with all his force. My legs went numb, and the pain has never since left me.”

If his hunger strike continues and he is not released from prison for medical treatment, his survival will be in danger. Any person who is willing to sacrifice his own life for his right and those of his co-nationals, is a commendable and respectable individual. Let’s all request that he break his hunger strike so he does not inflict further damage to his body. The future of Iran needs individuals like him.

There is more at Roos Online.

Ahmad Batebi has been on a hunger strike since his re-arrest.
Please, pray for this man.

Someone ought to put this guy on a T-shirt(?)
… instead of that communist killer, Che Guevara.

Winston has more surprising protest news coming out of Iran.