(6:30 PM) 10 rockets were just fired into south Lebanon at Israeli troops. Hezbollah is the first to fire.
So much for a ceasefire.

The future of Lebanon heads back home… 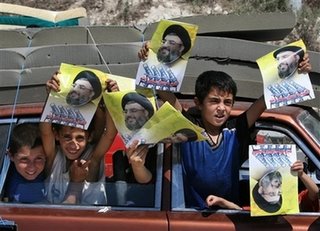 Hezbollah leader Sheik Hassan Nasrallah declared victory against the Israelis and he was the only one who can now defend the Lebanese people:

“We came out victorious in a war in which big Arab armies were defeated (before),” the bearded, black-turbaned cleric said in a taped speech. 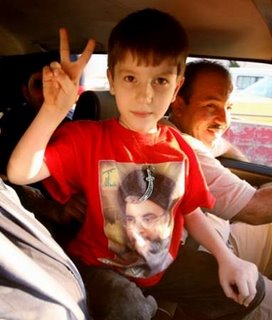 A Lebanese boy (C) who had left the country for Syria during the Lebanon-Israel conflict returns with his family following the ceasefire, at the Lebanon-Syria border in Magdel Anjar August 14, 2006. (REUTERS/Morteza Nikoubazl)

Nasrallah vowed that his followers would help rebuild a devastated Lebanon:

Nasrallah quickly moved to defuse domestic pressure for his movement to disarm, scolding Lebanese critics for bringing up the issue.

“This is immoral, incorrect and inappropriate,” he said, underlining that the Shiite community that forms the backbone of Hezbollah support had made “the most sacrifice” in the battle and that critics shouldn’t disturb the national unity behind his movement.

He also moved to blunt any resentment over the vast devastation wreaked in an Israeli campaign sparked by Hezbollah’s snatching of two Israeli soldiers on July 12. He said Hezbollah members on Tuesday would fan out across the south to help rebuild shattered homes and said the group — which is believed to receive large amounts of money from Iran — would help people to pay rent and buy furniture until their homes are rebuilt. 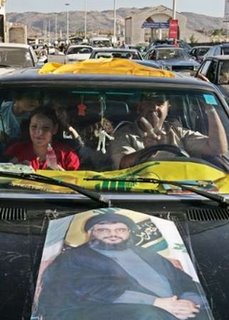 Lebanese return to their country after passing through the Syrian border crossing of Jdayda August 14, 2006. (Reuters)

And, from the New York Times, the US Ambassador says that Iran and Syria are inciting attacks in Iraq in response to the US support of Israel. 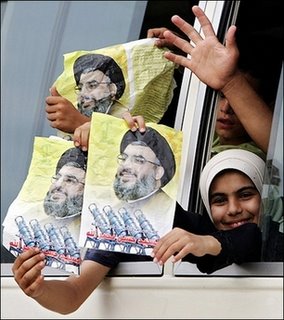 Displaced Lebanese children display posters of Hezbollah leader Hassan Nasrallah as thousands drive through a bombed-out highway in the coastal town of Naameh on their way home to south Lebanon. A UN-brokered ceasefire aimed at silencing the guns in the month-old Lebanon conflict took hold, sending thousands of displaced Lebanese streaming back home in the war-battered south as Nasrallah claimed a “historic victory”.(AFP/Ramzi Haidar)