It’s hard to take the Muslim Public Affairs seriously in the War Against Terror when they give “Paradise Now” a movie that romanticizes suicide bombers its movie award for 2006. 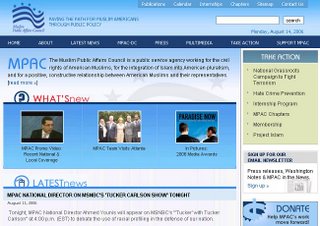 Here is what MPAC had to say about their 2006 award winning film:

Heretofore suicide bombers had been an off-limits topic, al-Marayati noted, and it was courageous to confront the story of the crimes done against Palestinians. And, he said, it took courage for Warner Independent Pictures to persevere in distributing “Paradise Now” despite a vicious international campaign to ban it.

MPAC also posts articles on their website about the “Roots of Mideast Dissension” being, of course- the Jews.

On August 11, 2006, Ahmed Younis, from the Muslim Public Affairs Council, on the Tuckers Carlson Show, attacked the practice of racial and religious profiling claiming, “In the past 15-20 years a majority of the suicide bombings that have taken place were done by the Tamil Tigers.” 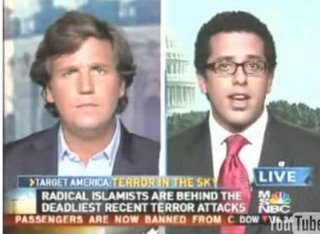 Maybe… but the Tigers weren’t flying planes into skyscrapers in New York or strapping themselves with bombs in Russian school gymnasiums or blowing up resorts in Egypt!
Terror Free Oil has the video from MSNBC.

Elsewhere… Foreign Minister Prince Saud Al-Faisal from Saudi Arabia said in Diplomat magazine that a majority of terrorist attacks (53%) happened outside of the Arab region in 2004:

In his foreword in the latest issue of “Diplomat” magazine, which is published on behalf of the Foreign Ministry’s Institute for Diplomatic Studies, Prince Saud cites data provided by Rand Corporation, a nonprofit institution specialized in research and analysis, in support of his argument that “a stranger to the Middle East relying only on the media for information about the region would be led to believe that we have a monopoly on terrorists acts.” His article is relevant in the context of the current wave of terrorism sweeping across the Middle East that have been triggered by Israeli attacks on the people of Gaza and Lebanon.

In the latest incident of Israeli state terrorism, 56 people, more than half of them children, (28) were killed when it bombarded the southern Lebanese village of Qana on Sunday.

It was the biggest single loss of life since Israel unleashed its firepower on Lebanon almost three weeks ago.

However, going by the international media, one gets the impression that only Arabs are responsible for the acts of violence, of which Israel is the victim.

Prince Saud said, “There is no single model or example that represents all acts of terrorism. Misguided people perform violent acts. Some do so in quest of glory and salvation based on religious fanaticism; others commit violent acts as a result of frustration and despair caused by circumstances and conditions beyond their control. There are also violent acts that are motivated by opportunistic politics — domestic and international.”

The foreign minister stressed the need for preachers, not only in the Arab world but also in other countries, to promote understanding and tolerance among people.

A majority of terrorist attacks may have taken place outside of the Arab region in 2004 (that cannot possibly include Iraq?) but 98-99% of the attacks were by Radical Muslim fanatics!

And, don’t forget… the British Muslim leaders who are blaming the Blair adminstration’s foreign policy on the fact that young middle class Muslim parents are using 6-month-old babies in terror attacks!

Is it no wonder then, that we see headlines like this:

“If You’re a Muslim – It’s Your Problem”