Authorities are now saying that the bombers acted out of “Racial hatred!”
The market is Jewish owned.
(More Below)

At least 2 children were killed in the blast. 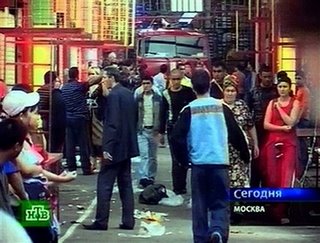 People crowd near the site of a blast, which hit a two-story trading arcade at Cherkizovsky market in the northeastern part of Moscow, Monday, Aug. 21, 2006, in this image made from television. A bomb blast tore through a Moscow market Monday morning, news agencies quoted the city’s deputy mayor as saying. Officials said the blast killed 10 people and injured 31. (AP Photo/NTV Russian Channel)

Russian authorities are not saying who was behind the blast at this time although Russia and Moscow has been hit by suicide bombings several times in the past:

Deputy Mayor Vladimir Resin said a homemade bomb detonated in a two-story trading arcade at Cherkizovsky market in the northeastern part of the city about 10:30 a.m. City prosecutor Yuri Syomin told reporters at the scene that 41 people had been hospitalized.

Syomin said the bombing was likely connected with organized crime or a dispute between businessmen, however investigators were not ruling out terrorism.

A 200-square-meter (2,150-square-feet) section of the market collapsed in the blast, Emergency Situations Ministry spokeswoman Yulia Stadnikova said. She said at least two of those killed were children.

The Russian general prosecutor’s office said it had opened a murder investigation. Terrorism is a separate offense under Russian law. 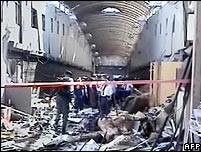 Investigators say it could have been a gangland settling of scores. (BBC)

Better yet, here is another theory…
It was set off by Islamic fascists who are somehow connected with Chechnya militants!

Authorities are now saying that the 31 people were injured in the blast:

A 200-square-yard section of the market collapsed in the blast, Emergency Situations Ministry spokeswoman Yulia Stadnikova said. She said at least two of those killed were children. 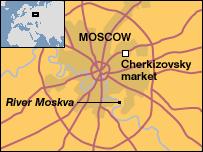 A map of the area from the BBC.

There was mass chaos after the explosion as vendors jammed the exits as blocking rescue vehicles:

As to the cause of the blast, “the most likely hypothesis is that the explosion was motivated by commercial competition or a dispute between criminal groups,” Moscow prosecutor Yury Semin told journalists at a briefing near the explosion site.

“The explosion took place between two containers which were located in the closed shopping pavilion… It is clear that initially a bomb exploded, and a gas explosion then followed,” Semin said.

Eight explosions have taken place at Russian markets since March 1999, leaving dozens dead and hundreds wounded. Such incidents are frequently attributed to disputes among criminal groups that are tied to the markets.

5 Chinese and 1 Vietnamese were killed in the blast. 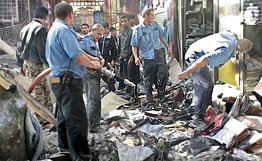 Moscow investigators scour the scene of the bomb blast. (RIA Novosti)
Russian authorities described the force of the bomb, via RIA Novosti:

“An explosive device consisting of 1kg of TNT without any solid encasement exploded,” he said. “The explosion occurred between two rows of metal containers. There was also a cafe nearby. Only a small area was affected.”

One witness said he had seen a bag being brought to the scene before the explosion.

Two men, who could be involved in Moscow market bombing were detained by the market’s security service few minutes before the blast occurred, tradesmen told Gazeta.ru online daily.

…Three or four people left a suspicious bag in the market’s cafe and tried to escape, unnamed witness said. Security was able to catch 2 of them, the one ran away.

Update 2: RIA Novosti is now reporting that the bombers acted out of racial hatred:

The bombers that detonated an explosive device at a Moscow market Monday killing 10 people were motivated by racial hatred, a source close to the investigation said.

Authorities in the Russian capital said 49 people were hospitalized after the attack and six patients were in a critical condition. The bomb went off at 10:27 a.m. Moscow time (6:27 a.m. GMT) at the market in the northeast of the city, where many Asians work.

“The investigation has evidence showing that the bombing at the Cherkizovsky market was based on grounds of racial hatred,” the source said.

Moscow Prosecutor Yury Syomin said earlier in the day that two suspects were being questioned and was confident that the case would be solved quickly.

“We have very strong evidence that the suspects were involved in this explosion,” he said.

Moscow officials say they have serious evidence against the two men they arrested this morning. (Via Itar-Tass)

Update 3: (Tuesday) Via Interfax… The two detained, Oleg Kostyryov born in 1986 in Udmurtiya, and Ilya Tikhomirov, born in 1986 in Moscow, were charged with the murder of two or more people by a group of people on the basis of ethnic hatred,” Y
ury Syomin, the Moscow prosecutor, said.