The Shape of Days and Pajamas Media have much more on the story.

** On Sunday, August 6, 2006, Reuters admitted that the photograph was doctored. Will Frank J.?

Here are a couple of other staged propaganda photos offered by Adnan Hajj from July 24, 2006.

Notice in this photo the clear skies…
It is interesting how the sun is directly on his face but the shadow of the building falls toward him. 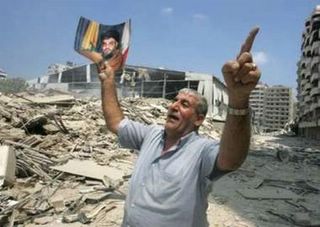 A Lebanese Hizbollah supporter holds a photograph of Hizbollah leader Sayyed Hassan Nasrallah and shouts slogans as he stands at a Hizbollah stronghold that was targeted by Israeli air strikes in southern Beirut July 24,2006. REUTERS/Adnan Hajj (LEBANON)

It just didn’t emanate enough of that destructive feeling you get when you see smoke.

So…
Adnan Hajj moved his Hezbollah actor over to a building that was still smoking(?) 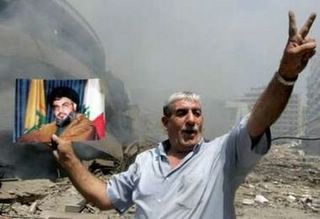 A Lebanese Hizbollah supporter shows the victory sign as he holds a photograph of Hizbollah leader Sayyed Hassan Nasrallah while standing near a building that was attacked by Israeli air strikes in southern Beirut July 24, 2006. REUTERS/Adnan Hajj(LEBANON)

Are these the same buildings?

These photos by Adnan Hajj may not have been doctored, but they were definitely staged!

Gaius at Blue Crab Boulevard needs to keep his day job.
It looks like there are some serious questions still on the Qana photos.