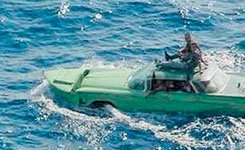 As Car and Driver points out, Cuban Luis Grass, is now a mechanic in Miami and is a proud owner of another GM product, a TrailBlazer:

“They took everything away from me — the paperwork and the keys. But I had an extra spare key in the glove compartment.” So he used that key to retrieve the truck from the military depot where the government had stored it — a place so chaotic with activity he’s not sure they ever knew he took it back. He drove it to his friend Marciel Basanta’s house and hid it. “After about 12 days, my wife and some friends went to the beach, and I was looking out at the horizon, and I told my wife, ‘You know, my love, we have to do this. That’s the only way to get out of here. I have no other choice.’”

…One of his first purchases after settling in Florida was a new Chevrolet TrailBlazer. He’s a firm fan of GM products, and there was a good rebate available. It would be an unthinkably luxurious vehicle in Cuba, where the per capita gross domestic product is only about $3300 — about 1/13th that of the United States — and new vehicles are rare and usually government-owned.

That TrailBlazer has also introduced him to that most American of consumer institutions — GMAC financing. Is it intimidating for him to owe that much money? “No,” he says. “In life you have to set goals. Whoever lives in fear doesn’t deserve to live.”